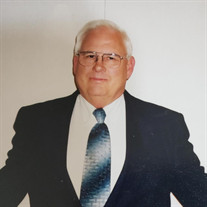 Aaron Mac Thompson passed away November 19, 2021. ‘Mac’ was born April 3, 1941 in Britton, Texas, to parents Della Mae and Marshall Thompson. Mac graduated from Mansfield High School in 1959 where he met his future wife, Barbara. He worked as a maintenance mechanic and volunteered as a fire fighter for the Mansfield Fire Department, where he gave selflessly and nearly lost his life in the Red Ball Gas House disaster in July of 1968. He was a dedicated husband, father and grandpa. He is survived by his loving wife of 60 years, Barbara, and their two daughters Donna Ward (Richard) and Jana Breazeale (Trey), his four grandchildren, Kristie McCaskey (Chris), Kellie Ward (Clint), Aaron Breazeale, Amanda Breazeale, and three great-grandchildren, Piper, Carter and Ellie McCaskey, along with his sister, Sue Thompson, and brother, Monroe Thompson (Nina). Visitation is scheduled for 4:00 to 6:00 p.m. November 23. A memorial service will be held at 10:00 a.m. on November 24. Both visitation and the memorial service will be held at Blessing Funeral Home at 401 Elm Street in Mansfield, Texas. Mac will be laid to rest at St. Paul Cemetery in Midlothian, Texas.

The family of Aaron Mac Thompson created this Life Tributes page to make it easy to share your memories.

Send flowers to the Thompson family.