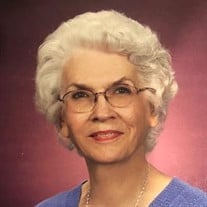 Alice Thrailkill, 87, passed into the hands of our Lord on January 26, 2020, in Dallas, Texas. Alice will be remembered by friends and family as a kind, gracious and giving lady who loved her family. She was always the first to bring a sick friend a cake, a pot of soup or a bouquet of flowers. Her grace knew no limits. Alice was born at home on July 21, 1932, to Walter (J.W.) and Pearl Storie in Bisbee, Texas. She lived in Duncanville for most of her life where she raised five children and was active in their school events. Alice was one of five daughters born to J.W. and Pearl Storie. Surviving sisters include Wilma Pool and Margie Smith, both of Burleson and Francis Walls of Mansfield. She is survived by four of her children: Sons, Clifton Thrailkill and wife Shirley; James Thrailkill. Daughters: Sue Saunders and husband Bob; Kay Gilmore and husband Bruce. Her grandchildren include: Aimee Dyson and husband Rob; Stephanie Ridder and husband Ryan; Melissa Thrailkill and husband Inigo Mielgo Saucedo; Alice Marie Thrailkill, Molly Rivas and husband Raymond; Kelly Carnahan and husband Cliff; Alicia Jolly and husband Aaron; Paige Gilmore, Meghan Saunders, Rob Saunders; Tyler Thrailkill and wife Sabrina, Russell Thrailkill, and Dylan Thrailkill. Others left to remember Alice include Ed Thrailkill, the father of her children, and many nieces, nephews and extended family and friends. She was preceded in death by her daughter Cynthia, her parents, sister Barbara Brenner, and grandchildren McKenzie and Matthew. It was Alice’s wish that, if desired, friends remember their charity of choice as a tribute to her memory. Visitation for Alice will be Thursday, January 30 from 6:00-8:00 pm at Blessing Funeral Home, 401 Elm St., Mansfield Texas 76063. Funeral service will be held in the chapel of First Methodist Church, 777 N. Walnut Creek Dr. Mansfield, Texas, Friday, January 31 at 11:00 am with Mike Ramsdell officiating. Pallbearers will be Tyler Thrailkill, Russell Thrailkill, Rob Saunders, Raymond Rivas, Cliff Carnahan, and Aaron Jolly. Interment will follow at Emerald Hills Memorial Park, 500 Kennedale Sublett Rd in Kennedale 76060.

Alice Thrailkill, 87, passed into the hands of our Lord on January 26, 2020, in Dallas, Texas. Alice will be remembered by friends and family as a kind, gracious and giving lady who loved her family. She was always the first to bring a sick... View Obituary & Service Information

The family of Alice Thrailkill created this Life Tributes page to make it easy to share your memories.

Alice Thrailkill, 87, passed into the hands of our Lord on January...

Send flowers to the Thrailkill family.