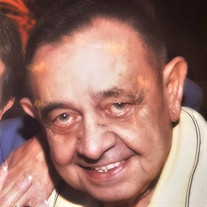 Angelo Lawrence Varrichio (known by all as “Vic”), age 82, went to be with his Lord and Savior September 15, 2020. Vic was born to Lawrence Varrichio, Sr. and Rose Varrichio on January 24, 1938 in Astoria, New York. At the age of 11, Vic met Mabel (Mae) Spinelli at a park bench in Astoria, New York which started a 70+ year continuous love affair that consummated in marriage in 1957. In 1956, Vic enlisted in the United States Marine Corps where he served in the Vietnam era with two tours of duty in Japan assigned to VMA 242 Aircraft Wing. He earned the Navy Achievement Medal and the National Defense Medal. He also earned six Good Conduct Medals. Vic served honorably for our country for 21 years retiring from the Marine Corps in 1977. When he retired he attended the University of Texas at Arlington and pursued a degree in Sports Management. As a young man and throughout his life, Vic was known as an exceptional and multi-versatile athlete participating in baseball at the semi-pro level, swimming, gymnastics, bowling, stickball, handball and later in life golf. He passed on his knowledge of sports to his children and others through coaching. He coached baseball teams in Texas and in South Carolina winning two consecutive state baseball titles in 1976 and 1977. He coached the “Spirals” gymnastic team in Arlington, Texas taking several gymnasts to state and national titles. Vic was an avid Texas Rangers baseball fan following the team from its inception in Texas. Vic was a loving and generous husband, father, grandfather and great grandfather. He is survived by his wife of 63 years, Mae Varrichio; his brother Lawrence Varrichio, Jr. and wife Elizabeth; four children: Mike Varrichio, Theresa Frisby, Anthony Varrichio and Phil Varrichio; son-in-law John Frisby: three daughters-in-law: Marie Varrichio, Misty Varrichio and Jill Varrichio; nine grandchildren: Jennifer Frisby, Kevin Varrichio, Christopher Varrichio, Cade Varrichio, Taylor Frisby, Skylar Varrichio, Peighton Varrichio, Courtney Varrichio and Camryn Varrichio; and one great grandchild Atticus Varrichio. In lieu of flowers, the family asks for donations to the Tunnels to Towers Foundation, formed after 9/11, that supports families of fallen first responders. Web site: https://tunnel2towers.org.

Send flowers to the Varrichio family.