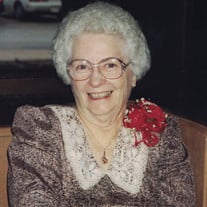 Ann Lorraine Duckworth was born on April 2, 1917 being blessed with a family of strong faith in the Lord, not perfect by any means since none of us are, but a family full of love. She passed this world for her heavenly home on August 2, 2018 (101 years old). What a wonderfully long life to live. Although in the last years she started losing her mental capabilities (and that worried her a lot) her faith was strong and singing her favorite hymns brought her calm and sometimes a smile or a nod. Oh but what a wonderful life of adventure and changes she witnessed. She told us stories of seeing a crop duster plane for the first time, riding to church in a wagon, working the farm with nothing but horse and plow, picking cotton in the heat of the August sun. This was when she lived on farms in and around Duckworth Flats, Ector and Telephone, Texas. Mother loved to ride horses from an early age. She tells the story that she could only walk “Little Joe” around the yard at first but the minute she got to the point they would let her go a little farther, away from sight of her mom, off she was in a trot. That was mom. She decided to do something and it was done. Mom left us her memories in a document she typed on her computer when she was 84. Below is a summarization of some of the stories she left for her children and grandchildren. She worked hard all her life and started working about 1950 when most women didn’t work outside the home but she managed both work and family. We don’t remember missing much because she worked. She not only worked outside the home but in an industry where women didn’t necessarily do more than answer the phone. Mom did more. She worked for 18 years for Morrison Supply Company in Fort Worth and most of the plumbers called her Miss Ann while she worked with their clients in the showroom and then helped the plumbers order the parts needed for their projects. She left Morrison Supply in 1966 when she decided she wanted a change and an opportunity to do it herself. That is a theme for her life and a saying from early in her childhood “I do it myself!!” as her sister Blanche used to say and who knows maybe those were the first words she did say. She bought the Main Street Café in downtown Arlington, Texas, which was a small café in old downtown. Mother stated she didn’t know anything about the restaurant business but to go in and order. She did very well with the café and when several years later the building was torn down, she built and began the “Old Main Street Café” on South Cooper where it still stands today. Mother sold the café in March of 1980 and two weeks later, her husband of 44 years, Marshall Woodroe Pierce died and she began the next phase of her life. A woman of strong faith, she decided God had her in Springtown, Texas, a widow, retired from the restaurant business to do something, so she worked toward setting up a meals on wheels and feeding the kids at church camp. Her Sister Blanche lived with her for over 20 years and they traveled and had fun and finally moved back to Fort Worth sometime in that 20 plus years. She really didn’t stop working; she actually was working for her son into her late eighties. What a wonderful Christian heart and loving mother. She was a giving person and is survived by her children, daughter, Marsha Ann Smith and husband, David; son, Riley (Rusty) Pierce and wife, Leann; and daughter, Melanie Sue Jones. She has six grandchildren and 12 great grandchildren. She had a plaque that states what was in her heart, “My greatest blessings call me Nana” The following words are from her “memories” document, writing about her decision to move into a retirement home when she was 88: “…and tho the decision was hard to make, I am happy with the arrangement (of course, when I made up my mind to do it, I made up my mind to be happy!)”. What an outlook on life we should all remember. The following was printed in her handwriting in her bible: Important Words: • Please • Thank you • I Love You • What do you think • I am so proud of you Her Mother and Father, Lucy Mabel Adams and Henry Gale Duckworth, her Sister, Blanche Wilmeth, and her son-in-law, Jimmy Jones preceded her in death. A final note written in Mom’s Bible: God can’t heal a broken heart until he has all the pieces.

Ann Lorraine Duckworth was born on April 2, 1917 being blessed with a family of strong faith in the Lord, not perfect by any means since none of us are, but a family full of love. She passed this world for her heavenly home on August 2, 2018... View Obituary & Service Information

The family of Ann Lorraine Pierce created this Life Tributes page to make it easy to share your memories.

Ann Lorraine Duckworth was born on April 2, 1917 being blessed...

Send flowers to the Pierce family.