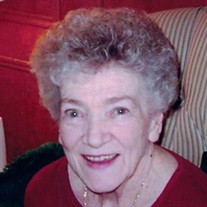 Anne Gilroy left this earth a few weeks before her 85th birthday. She will join, in Heaven, her beloved husband, Pat, and her youngest two children: Christine and Patrick Joseph (PJ). Her survivors, children Kathleen and Brian will miss her dearly. Anne was born on December 13, 1933, in Philadelphia, PA, and grew up in the Juniata Park area of the city. As a young adult, she was an executive secretary to the vice president of an appliance retailer. She married Patrick Gilroy, from Shenandoah Heights, PA, in May, 1958, and gave birth to her first child, Kathleen the following year. The young family moved from the city to the suburbs of Levittown, PA, where Anne was a stay-at-home mom. Three more children followed, Brian, Christine, and PJ. The family would live in the Thornridge section for 19 years. When the children were all in school, Anne returned to the business world, with jobs ranging from factory work to retail. In the early 80’s the economy in PA was declining and the family re-located to Texas, following dear friends who had moved there decades earlier. This is where Anne truly hit her stride and found a new career in bookselling. From her first job at B. Dalton to Children’s Department manager at its successor, Barnes & Noble, to the cashier position her declining health forced her to take, Anne relished working with the public, and sharing her love of books and reading. She sold so many memberships, she often removed herself from the monthly contest, so that other associates might have a chance to be top seller. Until 1994 when he passed away, Anne’s loving husband Pat drove her to work every day. Anne did not learn to drive until she was forced to, at age 60. Folks thought she would be timid and drive “like a grandma”, but she was more “the little old lady from Pasadena” and got a speeding ticket before the ink on her license was dry! Anne loved decorating her home, changing the décor with the seasons. Her wardrobe was also seasonal and always professional. Little children in the store would ask her, “Lady why do you look so nice?” The only thing that marred her otherwise perfect presentation was the oxygen canula she needed because of COPD. A person can live with COPD for many years, and Anne did. She lived to the fullest for as long as she could, and only “retired” when doctors said she had no choice. Her final years had more good days than bad, and the end came very quickly. With a diagnosis of double pneumonia, she hung on as long as she could, until her body, weakened by years of illness, simply had no more to give. She passed peacefully with her children each holding her hand.

Anne Gilroy left this earth a few weeks before her 85th birthday. She will join, in Heaven, her beloved husband, Pat, and her youngest two children: Christine and Patrick Joseph (PJ). Her survivors, children Kathleen and Brian will miss her... View Obituary & Service Information

The family of Anne Gilroy created this Life Tributes page to make it easy to share your memories.

Anne Gilroy left this earth a few weeks before her 85th birthday....

Send flowers to the Gilroy family.