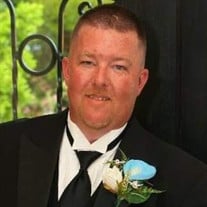 Anthony (Tony) Allen Smith, 49, died suddenly on Friday 6 August 2021 in Los Lunas, NM doing what he loved best – driving his big rig across the country. Tony was born March 24, 1972 in Wiesbaden, Germany to Pamela Smith and Leslie Smith. Despite medical challenges in his life, Tony’s positive attitude and contagious humor never waned. He was hard-working, responsible and reliable to the point that several of his past employers contacted him at various times asking if he was available to come back to work for them. From the age of 5, Tony wanted to be a truck driver. He loved working on cars, and the garage of his mother’s house (where he lived before and after high school) was always filled with motors, pulleys, grease, tires and car parts. This was where Tony and his friends would be most of the time, pursuing their passion of working on cars, having fun, and hanging out listening to country music. Tony maintained close friendships with high school friends and made new friends through the years. He Loved NASCAR and watching the Dallas Cowboys. He made a trip to North Carolina to watch the NASCAR races in 2018, which was one of his biggest dreams. He was loyal to his friends and family and would have done anything for anyone; they were all dear to him and he made sure that they always knew how much they meant to him. Tony was self-content as a baby and was happy to be in a playpen looking at people moving around him and playing with his toys. Or he would pull out the bottom drawer of a bureau in the living room, crawl into the drawer, and smile and laugh at people walking by. Throughout his teenage years, he was happiest when he could wear just blue jeans and a t-shirt. His needs and wants were simple and unassuming. Growing up, many times Tony would get Christmas or birthday presents and take them apart to see how they worked. When Tony was four months old, he travelled with his mother, father, sister, Grandma Smith and uncle Calvin to Paris and other European locations. When Tony was 14 months old, Tony’s Aunt Susan, Grandma Gerth, Grandpa Gerth, and Great Grandmother Nelson came from the U.S. to Germany. Tony travelled in a car seat with his mother, father, sister, and relatives from the U.S. from Heimbach, Germany to Stockholm, Sweden to visit relatives and friends in Sweden. Travels with his family throughout the years would be extensive, and no matter his age, he was always content, happy and enjoyed himself wherever he was. Tony and Lisa just celebrated 11 years of marriage on July 23rd and had moved to Bayside near the ocean about 2015.Tony loved driving the golf cart up and down shore line with Lisa and Sebastian. Lisa had made plans to travel with Tony on the road in November. Tony loved kids and kids loved him. Even though he had no children of his own, he was a positive influence on his two steps sons Ronnie and Ryan and was an integral part of their growing up. He also enjoyed spending a majority of his time with his grandson Sebastian, who called him "papa" He loved all 3 of his chihuahuas, but Tinker bell was the one that traveled with him on the truck. We will never forget Tony’s amazing qualities and attributes which he displayed every day of his life. He was an uncompromising worker, loyal to family and friends, had a contagious sense of humor always accompanied by a hearty laugh, a positive attitude despite his daily challenges, a talented big rig over the road truck driver and mechanic, a dedicated husband, son and brother. Everyone who had the privilege of knowing Tony will miss him tremendously and consider themselves fortunate to have had him in their life as an example of strength and importance of a positive outlook on life no matter what. Tony is survived by his wife, Lisa Smith of Bayside, TX; step-sons Ronnie and Ryan Deaver of Bayside, TX grandson Sebastian Deaver, Bayside, TX; mother, Pamela Smith, Tyler, TX; his father Leslie Smith (Karen), of Emory, TX; his sister Annette Erskine of Tyler, TX; his brother Kenneth Smith (Kelle), Weatherford, TX; great grandmother Joan Gerth of Minneapolis, MN; aunt Linda Brown (Russell) of New Ulm, MN; uncle David Gerth in Washington State; aunt Kathie Pryor (Richard) of Brockport, NY; aunt Susan Gerth of Seguin, TX; uncle Calvin Smith (Linda) of Point, TX. He is also survived by nieces and nephews Aldin (Eva) Erskine, Matthew Irby, Victoria Erskine, Jessica Erskine, Madison Smith and great nephew Anakin James Erskine. Stream Link https://video.ibm.com/channel/23866912/video/rc4jd0