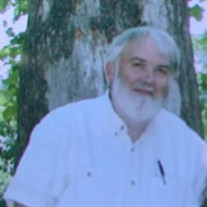 Arthur Glenn Barnard, 72, of Alvarado, TX, passed away on August 23, 2020. Glenn was born to Arthur Glenn Sr. and Mildred Louise (McPhearson) Barnard on December 10, 1947 in Washington, D.C. Glenn spent his younger years growing up in a rural area near Tallahassee, Fl. where he also graduated high school. For a brief time, he and his brother Charles developed an interest in auto racing. Glenn worked on the engines and his brother drove the dragster. I’m sure there were some close calls and stories untold. Glenn also had a love of stamp collecting which started when he was a boy. This love of collecting expanded to coins and cards then eventually to an occupation buying and selling antique collectables. In 1982, Glenn met Joan through a mutual friend at her workplace. The relationship blossomed and she became the love of his life. They were married that same year; a marriage that would span 38 years. After 10 years in Florida, they moved to Texas first to Livingston then to Alvarado where Glenn took a job at Wal-Mart where he worked for 20 years; many of them as a Customer Service and Support Associate in the automotive department. Fishing was a great joy to Glenn. It didn’t matter if it was on a dock in Destin, Fl. or a pond in Texas, it was something that always brought a smile to his face. Glenn grew up Methodist, was a professed Christian, and loved his Heavenly Father and Lord and Savior Jesus Christ. Glenn loved his family. He was accepted as a father and role model to Joan’s children who always found him to be a genuine, authentic, true version of himself, no matter what the scenario. Family memories are vast and include annual “beach-week” vacations in Florida and Christmas gatherings in Arlington, Tx. Glenn is proceeded in death by his parents. Glenn is survived by his wife, Joan Marilyn Carpenter Barnard, brother Charles Edward Barnard, stepchildren Steven R. Flack, Michael L. Williams, Michelle A. Bilardi and Sheila K. James. Grandchildren include Rachel Bilardi, Richard and Samantha Williams, Trina M. James, Alanna D. James, Kelly N. Flack, and Austin T. Flack. Great grandchildren include Malachi and Gabriel Williams, Isabella Williams Spaeth, Alina K. James and Nelda Hawkins Bilardi. Glenn, or Papa Glenn, as we all call him, loved and was loved by all his family. We will cherish God’s gift of Glenn, the memories given to us, and the time we had with such a gentle, loving, and generous spirit.

Arthur Glenn Barnard, 72, of Alvarado, TX, passed away on August...

Send flowers to the Barnard family.