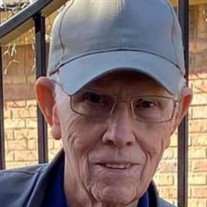 Audie Eugene Patton was born October 3, 1934 in Runnels County, Texas to Aulta Clifford Patton and Lola Sallie Faglie. He passed from this life into eternal life with Jesus Christ on April 3,2022 at the age of 87. A man of few hobbies; he fished when he was younger and loved to talk, mainly about history, current political events, and happenings on the farm where he grew up. He was known for being orderly, punctual and tidy, due in part to his extensive military background. He entered the Air Force January 14, 1954. Most of that time he was stationed in Germany. He achieved the rank of Sergeant and was honorably discharged December 7, 1957. He attended Abilene Christian University and later took classes at Arlington College now known as UTA. He continued to work for the military/government in various positions, including Litton Industries in Lubbock, building airplane parts for the military. In 1970 he moved his family to Grand Prairie taking a position with the defense department at DCASR in Dallas until his retirement in 1990. He worked for a short time as a substitute teacher in GPISD and later took a position at Murray Mortgage in Dallas. He ended his working career at Intertek Technical Services where he performed quality assurance work for the US postal service before retiring for good in 1996. He is preceded in death by his wife, Laura Juanita Patton née Thomasson. They were married August 23,1958 in Everman, Texas and remained married until her death on April 11, 2018. He is survived by his four daughters, Gina Riggan and spouse Jerry, Donna Crose and spouse Sidney, Amy King and spouse Greg, Becky Patton: 9 grandchildren, Greg (Courtney) Riggan, Carley Crose, Tobin (Joyti) Hodges, Jill (Kendra) Acton née Riggan, Laura (Mohamed) Hamadi née Hodges, Josh (Kailey) King, Daniel (Katja) King, Kaeleigh Crose, Ben King: 7 great­grandchildren, Jude, Parker, Graham, Cassidy, Wynton, Oliver and Everleigh. Eugene was a member of the Pleasant Ridge Church of Christ upon his death but previously served as an elder at Freetown Road Church of Christ for several years. He was a believer all his life.

Audie Eugene Patton was born October 3, 1934 in Runnels County, Texas to Aulta Clifford Patton and Lola Sallie Faglie. He passed from this life into eternal life with Jesus Christ on April 3,2022 at the age of 87. A man of few hobbies; he fished... View Obituary & Service Information

The family of Audie Eugene Patton created this Life Tributes page to make it easy to share your memories.

Send flowers to the Patton family.