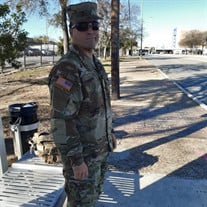 Brett James "B.J." Harms age 36 of Colorado Springs, Colorado went to be the Lord on Monday, April 18, 2022. He was born on December 15, 1985 in Escondido, California to Michael "Buffalo Chip" and Linda (Kerekes) Harms. B.J graduated from Escondido High School where he was involved in Junior ROTC, the drill team, and the swim team. He was baptized and confirmed to the Lutheran Missouri Synod by his grandfather, Rev. Jerry Harms or as he coined him Pappa Church. He spent a year as an exchange student in the Black Forest region of Germany, coincidentally the same region the Harms family originated. He went on to receive a Bachelor of Arts degree in Linguistics from the University of Leipzig in Leipzig, Germany, speaking fluently English, German, and Arabic. He could also converse in Spanish, Russian, Mandarin, and Cantonese. B.J. became an educator, teaching in China from 2017 - 2019. He enjoyed flying; a pass time he shared with his Dad. He loved traveling as is shown in his career choices, he was an avid scuba driver and boater. B.J. enjoyed studying history, particularly WWII European theater and the Civil-war - traveling to many battlegrounds of both. B.J. could talk to anyone, a trait he gets from his mother. His Dad often said they could talk to a tree and soon have it talking back. He was passionate about volunteering for the Challenge Air for Kids and Friends, helping physically challenged children and Carry the Load, which raises money to give to service members and first responders that have lost someone in the line of duty. He married his loving wife of two years Marilize in 2020 and through her was beginning to understand fully God's Grace. He enlisted in the United States Army in October of 2020. He was stationed in Fort Sam Houston and later in Fort Carson. He was preceded in death by grandparents, Jerry and Jody Harms; grandfather, Julius Kerekes; and Aunt, Cathy. He leaves behind to cherish his memory his wife, Marilize Stanley Harms; Marilize's daughter, Ashley Stanley and her son, Peter John Stanley; his mother, Linda Kerekes-Harms; his father, Buffalo Chip Harms; grandmother, Grace Kerekes; Uncles, Dr. Scott Harms and Kenny Kerekes; Aunt, Connie Srogi; and numerous cousins, extended family and friends. B.J. lived a full life and is gone from this earth too soon but will live in our hearts forever.

Send flowers to the Harms family.