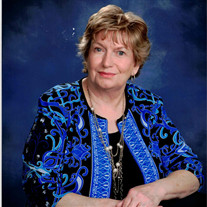 Barbara Jean Waltman Thomson went home to her Lord on December 31, 2020. Barbara was born January 28, 1943, to Vivan Schrimpshire and Jim Davis in Shubuta, Mississippi. Upon the death of her father, she was adopted by her uncle, and was raised by Willie and Freddie Waltman. She grew up in Meridian, Mississippi, before moving to Dallas. Barbara had two brothers and six sisters. In Dallas, Barbara met and married James Richard Thomson whom she was married to until his death in 1987. Together they had 3 children - Lora, Rhonda and Richard. Barbara was a committed worker. She worked more than 20 years at Skaggs Alpha Beta until it closed in 1993. She was part of their traveling team and loved helping to open new stores and train new staff. Barbara later worked for the State of Texas, helping to supervise the children’s Medicaid program. She retired from that job in 2012 after a long, successful career. She made and retained many good friends from both careers. Barbara enjoyed her retirement and, after a few years, joined the Watercrest at Mansfield community in Mansfield, Texas. There she had an active group of friends and participated in several activities, including cards, swimming, and brunch/dinner groups. She also loved the casino and was notoriously lucky. Barbara was a confirmed Catholic, attended St. Jude’s in Mansfield, and enjoyed volunteering at Baby’s World at St. Maria Goretti’s in Arlington, Texas. Through everything, Barbara’s passion was family and tradition. She loved her children but especially loved her grandchildren and great-grandchildren. They loved her back and knew her as “Granny” and “Great Granny,” respectively. Barbara was preceded in death by her husband, James Richard Thomson, mother and father, Vivian Schrimpshire and Jim Davis, her adopted father Willie Waltman, her brother Jim (Bud) Davis; sisters Willie Lee Ranier, Margret Galloway and Carolyn Sager. Barbara is survived by her children Lora Logan (husband Ken Logan),Rhonda Onley (husband Todd Onley), son Richard Thomson and brother Robert Waltman; sisters Liz Kilmer (husband Mike Kilmer), Ruth McDowell, LeLynn McKnight (husband Raymond McKnight) and sister-in-law Sue Thomson; grandchildren Vincent Logan (wife Amanda Logan), Kimberly Gremmer (husband Caleb Gremmer), Ashley Onley, William Onley, Caroline Thomson, Jared Thomson and Taylor Thomson; great-grandchildren Hayden Logan, Austin Logan, Evelyn Gremmer and Jude Gremmer. Barbara Thomson will be greatly missed by her friends and family.

Barbara Jean Waltman Thomson went home to her Lord on December 31, 2020. Barbara was born January 28, 1943, to Vivan Schrimpshire and Jim Davis in Shubuta, Mississippi. Upon the death of her father, she was adopted by her uncle, and was raised... View Obituary & Service Information

The family of Barbara Jean Thomson created this Life Tributes page to make it easy to share your memories.

Send flowers to the Thomson family.