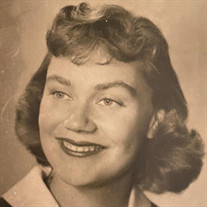 Barbara ‘Penny’ Van Buskirk, 83, of Mansfield, passed away peacefully on September 9, 2021 with loved ones by her side. She was born to Maybelle and Lester Deicke in Stockton, CA on July 14th, 1938. She graduated from Stockton High School and went on to study business at San Francisco City College. In 1959, she married the late Lewis Franklin Van Buskirk. For over 40 years, they ran a chain of retail garden centers in Stockton, CA where Penny was corporate secretary and bookkeeper. She is survived by her 3 daughters, Jeanne and her husband Steven Shuff, Pam and her husband Donald Rodrigues, and Laurie, as well as her 5 grandchildren, Alicia and her husband Nick Pallett, Alex Rodrigues and his wife Savannah, Carissa and her husband Eli Moore, Caitlynn and her husband Cory Rushing, and Andrew, along with 4 great-grandchildren, Scott, Sadie, Skylar, and Maverick. Penny was predeceased by her loving husband in March of 2016, after 56 years of marriage; she was also predeceased by her geat-grandson Elijah Lewis Rodrigues in January of 2019. She was active in the International Order of Rainbow for girls where she served as Mother Advisor to the Linden, CA assembly. She was also a member of Eastern Star where she served as Worthy Matron. Through her service with the International Order of Rainbow for girls, she received the Grand Cross of Color, the highest recognition awarded to members. She was an avid golfer and a member of the Woodbridge Golf and Country Club for many years. She enjoyed wine-tasting, vodka, cats, gardening, and hosting parties with her extended family and friends. She loved attending sporting events, especially for her children and grandchildren. She also loved the Dallas Cowboys – a team she followed since the playing days of ‘Dandy’ Don Meredith. In 1998, she finally got to see her team play at the House of Champions in Irving, TX. Penny enjoyed a good card game and was taught by her dad very early to cheat when she could. A talent she never lost. The visitation is on September 22, 2021 from 6 p.m. to 8 p.m. at St. Jude’s Catholic Church. The funeral mass will be held the following morning at 11 a.m. In lieu of sending flowers, the family encourages memorial contributions in Penny’s name to The Mansfield Animal Care and Control, a local animal shelter.

Barbara &#8216;Penny&#8217; Van Buskirk, 83, of Mansfield, passed away peacefully on September 9, 2021 with loved ones by her side. She was born to Maybelle and Lester Deicke in Stockton, CA on July 14th, 1938. She graduated from Stockton High... View Obituary & Service Information

The family of Barbara Jean Van Buskirk created this Life Tributes page to make it easy to share your memories.