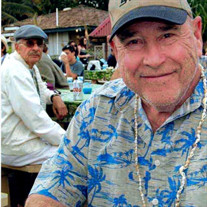 Benjamin Elliot Kendrick fell asleep for the final time on March 14, 2021, surrounded by his family, who know that he woke up in Heaven to be greeted by the many loved ones who went Home before him. He is now on a very well-deserved vacation. His family will miss him terribly, and their hearts are broken. But they know that they will see him again and are thankful that the Lord has taken him to paradise and made him whole again. Ben was born in Bennington, Oklahoma, to Daniel Cecil Kendrick and Cleo Othel Forbes. He was one of 11 children. His family later moved to Durant, Oklahoma, where he met the love of his life, Jan Ruth Davis. A small-town football star, he graduated in 1955 from Durant High School and went to work in the oil fields. He soon landed a job at the then-new General Motors plant in Arlington, Texas, but his start there was interrupted by a draft notice from the Army. He married Jan in August 1957, shortly before leaving for Army training, and then deployed to Korea. Ben went on to serve on active duty and in the reserves for a total of eight years. Ben’s first son, Benjamin “Benny” Elliot Kendrick, II was born while Ben was stationed in Korea. Ben returned to the States when Benny was seven-months old, and he went back to work at GM. He bought a house a few blocks from the plant, where he would live for the next four decades. He had two more children, James Daniel “JD” Kendrick and Ruth Othel Kendrick Beasley. Ben was a member of UAW and retired from GM after 31 years of service. He dedicated his time in retirement to helping raise his grandkids and working at JK Farm and Ranch with his son JD in Mansfield and Alvarado, Texas. Ben was a famous jack-of-all-trades whose knowledge spanned from farming and carpentry, to electrical and auto-body work. Ben loved his grandchildren, and they adored him. In his final years, Ben gradually became unable to physically do all he wanted. But he still made sure to be present for games, performances, and other events for his kids and grandkids. He loved his friends and family, and let them know by the gifts of his presence and time. Ben was a beloved husband, father, brother, grandpa, great grandpa, uncle and friend. He was preceded in death by his parents, Jan, Benny, and sisters, Beulah, Mary Lottie, June, Nell, Fayna, Lota, Jean, as well as his close friend Grandpa Lyle Trowbridge. Ben is survived by his brother, Harold “Bud” Jackson, and sisters Ruth Russell and Lois Mitchell. Ben’s legacy is carried on by JD and Ruth, his grandchildren Justin (and Anna) Chapa, Heath (and Lindsey) Chapa, Erin (and AJ) Capobianco, Derek (and Mylene) Beasley, Cera (and Ryan) Holder, Tiffany (and Tim) Chatham, and James Benjamin Kendrick. Ben was fortunate to know his great grandchildren: Krystelle, Kaylee, and Nicolas Capobianco; Benjamin, Audrey, and Evelyn Chapa; Payton, Paisley, Ryder, and Presley Chapa; Myka Beasley; James Karter and Jana Klaire Chatham; and Oliver Holder. Numerous nephews, nieces and friends considered family. Pallbearers are Justin Chapa, Heath Chapa, James Benjamin Kendrick, Ryan Holder, Tim Chatham, and Kevin Trowbridge. Video Link: https://video.ibm.com/channel/23866912/video/m5a4r0

Benjamin Elliot Kendrick fell asleep for the final time on March 14, 2021, surrounded by his family, who know that he woke up in Heaven to be greeted by the many loved ones who went Home before him. He is now on a very well-deserved vacation.... View Obituary & Service Information

Send flowers to the Kendrick family.