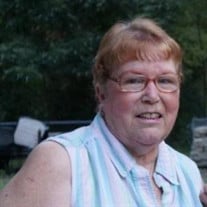 Betty June Willig was escorted into the arms of Jesus on February 1, 2021. June was the 3rd of five children born to Charlie & Faye O’Neal in September of 1936. She was raised & grew up in & around the Cedar Hill, Texas area, & attended Cedar Hill High School. Just out of high school & through mutual friends, June met & fell in love with Robert Ray (Bobby) Willig, Sr. During the first years of their marriage, June & Bobby lived near the army bases at Fort Campbell in Kentucky & Fort Benning near Columbus, Georgia, where Bobby was stationed. She often spoke fondly of those youthful days while Bobby was in the military. In her voice one knew she had met the love of her life. Over the course of their 67-year marriage they rarely spent a night apart. June & Bobby started their family in 1956 & planted their roots in Duncanville on West Mona, where she became what is known as one of the original June Cleaver era stay-at-home moms. She kept an immaculate household & was famously known for her meatloaf and Thanksgiving cornbread stuffing. Raising 4 kids in their 600’ sf house on West Mona never seemed daunting to June. She & Bobby made sure the Willig kids all lived in the same house, went to the same schools & kept their ties in the same neighborhood until the last one left the Willig nest. In the 80’s Bobby & June purchased & moved to the “Lake House” in East Texas, where they enjoyed retirement & country living. The Lake House soon became the Willig’s meeting place for family events, lake recreation & long holiday weekends with loved ones. June was a beautiful red-head, and she always claimed most important beauty tool was a quality tube of lipstick. She loved life with her family & friends. Her favorite things over the years included square dancing, weekends at Lake Navarro Mills with 4 kids & a pop-up camper, & a social life with a close-knit circle of friends. Prior to hurricane Katrina, she & Bobby spent time at Holly Beach, Louisiana where they enjoyed watching the shrimping boats at night. June enjoyed good food & loved sweets, especially the cookies made by granddaughter, Danielle. She was a huge fan of fresh baked apple fritters. June was not a person to imbibe alcohol; however, she was known to love a good margarita. June is preceded in death by her parents, Charlie & Faye, sister Patsy, brothers Charles (Plug) O’Neal, little brother, 11-year-old Richard & two additional four-legged children, Bullet & Bandit. June is survived by her beloved husband of 67 years, Robert (Bobby) Willig, Sr., baby sister, Linda (Butch) & Rusty McCord, sons, Robert (Bobby) Jr. & Judy; Darren & Sherry; daughters, Tammy & Steve, & Angela & Mike. To date June & Bobby have been blessed with 16 grandchildren, 26 great-grandchildren, & 2 great-great grandchildren. Also honoring June’s life are a large host of nieces & nephews, friends & neighbors. A Celebration on June’s life will be held at 12:00 noon, Saturday February 27, 2021 at Blessing Funeral Home, 401 Elm Street, Mansfield, Texas 76063. https://www.blessingfuneralhome.net The Willig family suggests memorial contributions in memory of Betty June Willig to the Abigail E. Keller Foundation at https://aekellerfoundation.org . Due to Covid-19, a maximum of sixty (60) people are allowed in Blessing Colonial Chapel at any given time. Also, face mask and social distancing are required in Blessing Colonial Chapel. Betty Willig's service can be view at the following link: https://video.ibm.com/channel/23866912/video/xidbtn

Betty June Willig was escorted into the arms of Jesus on February 1, 2021. June was the 3rd of five children born to Charlie & Faye O&#8217;Neal in September of 1936. She was raised & grew up in & around the Cedar Hill, Texas area, & attended... View Obituary & Service Information

Betty June Willig was escorted into the arms of Jesus on February...

Send flowers to the Willig family.