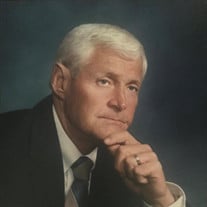 Billie Warren Timms of Mansfield Texas passed away from this earth peaceful and at rest on Sunday August 1, 2021. Billie worked for Vought Aircraft Group as Director of Materials for 33 years. He was a graduate of Panhandle A&M with a bachelor's degree in science. Billie enjoyed life, he was most passionate about Family, Friends, Golf and what he called Real Country Music, two favorites were Merle Haggard & George Jones. He said golf was just a vehicle to make forever friends and meet wonderful people. He claimed Golf was his Therapy. Billie set the example of how to be a better person, husband and father to his two sons. Thanks, could never be enough. The love he has for Jaby could never be measured; she was his constant rock when the world would sometimes get cockeyed. Billie will be dearly missed and leaves a void that will never be filled, but that's ok as always, he went over and beyond to make sure his family will be just fine, it's in our blood. Billie has some old friends to catch up with and I'm sure putting together the groups. What a fantastic group it will be. Billie never liked a big deal made on his behalf. Therefore, there will be a visitation at Blessing Funeral Home in Mansfield TX. then a graveside ceremony for immediate family members. He is surpassed in death by his dad, Roy Utah Timms, Mother Elner Timms, Brother Wayne Timms and Sister-in-Law Donna Timms. Billie is survived & blessed by his loving and ever-present wife of 60 years Jerrie "Jaby" Timms, Sons Doug & Randy Timms, Daughters in law Amanda Timms & Lisa Timms, three grandsons Cole Timms, Josh Timms & Cullen Timms. Billie was a proud Husband, Brother, Dad, Uncle, Father-in-Law and most of all grandfather. He is also survived by many other family members. He considered anyone part of his extended family whether he knew them or not, passed or living that ever teed it up at Walnut Creek Country Club. Billie considered family as everything. He was a member of Walnut Creek Country Club in Mansfield TX. since 1974.

Billie Warren Timms of Mansfield Texas passed away from this earth peaceful and at rest on Sunday August 1, 2021. Billie worked for Vought Aircraft Group as Director of Materials for 33 years. He was a graduate of Panhandle A&M with a bachelor's... View Obituary & Service Information

The family of Billie Warren Timms created this Life Tributes page to make it easy to share your memories.

Billie Warren Timms of Mansfield Texas passed away from this...

Send flowers to the Timms family.