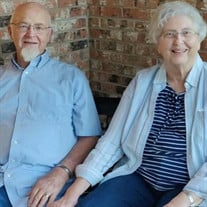 Billy Joe Anderson, age 82, died peacefully in his sleep at his Arlington home February 23, 2022 surrounded by family and friends. He was born in Troy, Texas November 5, 1939, the youngest child of Melvin Houston and Lavada Anderson. The family moved to Arlington when Bill was two years old. He attended Arlington High School. After high school, he joined the US Army, serving three years including time in Germany. While there, Bill corresponded with Shirley Morgan and they were married November 22, 1962. Bill and Shirley celebrated 58 years of marriage before her passing on January 2, 2020. They raised a family and built a home so loving that people made annual trips to visit them and see their field of bluebonnets. The towering pines Bill and Shirley planted are soaring testaments to the permanency of a long, and careful, vision of life they both shared. Bill and Shirley were lifelong, and active, members of the Church of Christ, worshipping with the Mansfield congregation for over 50 years. Bill was a humble man characterized by a deep faith in his family, church and his community. As Bill was a natural maker of things, he became a highly skilled machinist, and everyone who worked with him for almost forty years at the General Motors assembly plant in Arlington respected his ability to “save the line” with on-the-fly solutions that could only be hand-tooled. He continued repairing, making and creating works of welded art until very recently. Bill also served in the Texas National Guard for many years and had interests in history, antiques, and horticulture. He was a man of few words who led by example, by hard work, and by being fair. He will be missed for the times he stepped up when no one else would, for the fights he stopped, for the times he changed the outcome by being both present and a man of God. His friends were lifelong and the community continues to feel the loss of both Bill and Shirley. Bill Anderson is survived by his daughter Laurie Bailey and husband Mike of Auckland, New Zealand; his son David Anderson and wife Michelle of Burleson, TX; and granddaughter Sydney Allison and husband Dave, of Dallas. Bill was preceded in death by his parents, sister Patsy Clark, brother Frank Anderson, and his wife Shirley. God Bless and Rest Them All. Bill’s family is grateful to the Community Hospice of Texas for the kindness their staff showed to Bill in his final days and the deep strength they provided to all. Memorials may be sent to Foster's Home for Children in Stephenville, Loving Stitches c/o Mansfield Church of Christ, or charity of your choice.

Billy Joe Anderson, age 82, died peacefully in his sleep at his Arlington home February 23, 2022 surrounded by family and friends. He was born in Troy, Texas November 5, 1939, the youngest child of Melvin Houston and Lavada Anderson. The family... View Obituary & Service Information

The family of Billy Joe Anderson created this Life Tributes page to make it easy to share your memories.

Billy Joe Anderson, age 82, died peacefully in his sleep at his...

Send flowers to the Anderson family.