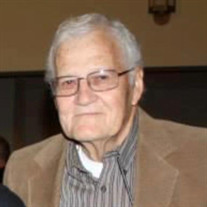 Billy Frank “Pop” Howard, aged 88, passed away on April 9, 2021 with the love of his life by his side. He was born on November 19, 1932 to Benjamin Franklin Howard and Janie Leone Griffith Howard in Britton, TX. One of six children, 3 girls and 3 boys, spent his early years farming and playing baseball “with the guys.” Bill graduated from Mansfield High School in 1951, where he was played football, basketball and ran track. He was kind, friendly and outgoing which led to him being voted Senior Class President, Senior Class Favorite and Representative to Arlington State College’s Coronation. Bill entered the Navy in 1952 and served in the Korean War on the USS Bennington. Discharged with honors, he was awarded the Navy Occupation Service Medal (Exceptional), National Defense Service Medal and Good Conduct Medal (1st award). A life-long member of the Church of Christ, Bill met and fell in love with “the preacher’s daughter” in 1956. He and Judy married on June 10, 1960. He worked sales with the industrial machinery market and spent his evenings/weekends with his family, playing ball, coaching his son’s baseball teams, coaching his daughter’s softball teams and working many projects around the house with his favorite girl, Judy. Bill was a deacon and song leader at Mansfield Church of Christ for many years. He and Judy loved having a full house and it was the place to be for Barry and Tracy’s high school and college friends to come hang out. Bill was preceded in death by his parents; sisters Dorothy Smith, Bonnie Merritt, and Wilma Roper; brother O.L. Howard and twin brother, Bob Howard. Survivors: Love of his life for over 60 years, Judy Howard; son Barry Howard and wife, Valerie; Daughter Tracy Howard; granddaughter Sydney Howard; grandson Casey Howard; numerous cousins, nieces and nephews. In lieu of flowers, the family has requested donations to The Patriot Guard or Wounded Warrior Project. Video Link: https://video.ibm.com/channel/23866912/video/tpoqzu

Send flowers to the Howard family.