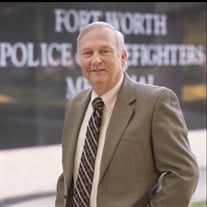 Billy E Samuel Jr 68, also known to his family as “Eddie”, passed away January 11th after a hard fought 3 week battle with Covid 19. There will be a Celebration of Life Memorial Service on Saturday, January 23, 2021 at 3pm at the Will Rogers Auditorium, 3401 West Lancaster. All Covid restrictions will be enforced. In lieu of flowers donations will be accepted to: A Wish With Wings www.awww.org 3751 West Fwy, Fort Worth, 75107 or Fort Worth Stock Show Calf Scramble, P.O. Box 150 Fort Worth, Tx 76101 He was born December 20th 1952 in Fort Worth to parents Billy and Cynthia Samuel. Billy graduated from the Fort Worth Police Academy in April 1975, advanced to rank of sergeant, working in multiple different divisions until his retirement 34 years later. Billy served as Vice President of the Police Officers Association for many years where he fought hard to improve benefits and working conditions for all officers. He served as Chairman on the Board of Directors of the City of Fort Worth Retirement Fund, both while still working, and also after retirement. He also served on the Board of Directors for the Texas Association of Public Employee Retirement Systems [TEXPERS]. He began working at the Fort Worth Stock Show and Rodeo in the late 1970’s, and since 1985 has been in charge of security to ensure the safety of everyone attending this 23-day event. He loved the outdoors, and was happiest when he was fishing, hunting, riding ATV’s, and camping with both his family and friends. After retirement, he and his wife traveled to many places throughout the world. Billy was a devoted husband, father and brother, but his favorite title was “Pops” to Hadley, Kenlee and Vance Jr. Billy is survived by his wife of 44 years Sue, son James, daughter Tracy and husband Vance, grandchildren, Hadley, Kenlee and Vance Jr, brother Danny and wife Jeannie, and numerous Aunts, Uncles, Cousins and many friends. He is preceded in death by his parents Billy and Cynthia Samuel and brother Stanley Samuel.

The family of Billy Edward Samuel Jr created this Life Tributes page to make it easy to share your memories.

Send flowers to the Samuel family.