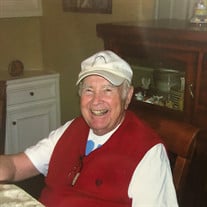 Bobby Joe Padgett went to be with his Lord and Savior August 15, 2019 with family by his side. He was born in Chickasha, Oklahoma on December 27th, 1930 to Della Sikes Padgett and Charles Wesley Padgett. At the age of 22 in 1952 Bobby enlisted in the United States Navy serving as the Mail Clerk aboard the USS Ware for 4 years. During this time, he achieved the Navy Occupational Service medal for his stint in Europe and the National Defense Service medal. After serving, Bobby attended college at Central State University in Edmond Oklahoma, obtaining a degree in business. He is preceded in death by his parents; brothers, Charles, John and Ralph and sister, Marilee. He is survived by his beloved spouse JoAnn, 2 adored children Tracy and husband Brian Baggett of Mansfield, Texas and Larry and wife Jeanna Padgett of Richmond, Texas and 4 beautiful grandchildren, Trevor and wife Heather, McKenzie and soon to be husband Owen, Trenton and Tyler. On October 8, 1955, he started his 63-year love journey with JoAnn Evelyn Anderson in Oklahoma City. They moved to New Orleans then Houston and started their family in 1961. His adult life was filled with business, tennis, hunting, fishing and traveling. Bobby was ranked in Texas Tennis from age 40-82. He found joy traveling around the state with JoAnn playing in tournaments and hanging out with friends. Bobby had a successful career in sales and developing commercial real estate in Houston. In his retirement, he prided himself by handling his own portfolio and having the best self-managed portfolio in the state of Texas according to Wells Fargo. The family wants to personally thank Tamisha and Tamika, the care giving twins that ensured Bobby’s final weeks on this earth were in the upmost comfort. The family would also like to thank the cul-de-sac neighbors that constantly checked up on him at their house in Lakeway, He always loved visitors. A memorial service is planned on Monday, September 30th in the Chapel of First Methodist Church Mansfield. After a small reception, everyone is invited to the Dallas-Fort Worth National Cemetery for a Military Honors Service. At a later date, his ashes will be scattered across his mother’s grave in Chickasha, Oklahoma. In lieu of flowers, please consider a donation to “Hands of Christ Ministry” at the First Methodist Church Mansfield, 777 N. Walnut Creek Dr. Mansfield, Tx 76063.

Bobby Joe Padgett went to be with his Lord and Savior August 15, 2019 with family by his side. He was born in Chickasha, Oklahoma on December 27th, 1930 to Della Sikes Padgett and Charles Wesley Padgett. At the age of 22 in 1952 Bobby enlisted... View Obituary & Service Information

The family of Bobby Joe Padgett created this Life Tributes page to make it easy to share your memories.

Bobby Joe Padgett went to be with his Lord and Savior August...

Send flowers to the Padgett family.