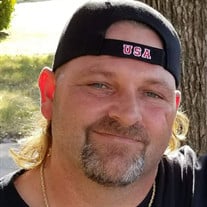 Claude Ray “Bubba” Feaster, 49, passed away January 7, 2020 in Dallas. Bubba was born July 13, 1970 to Billy Ray and Billie Marie (West) Feaster in Haskell, Texas. Bubba attended the Kennedale school system then went on to be a self-employed contractor, specializing in fencing but, talented in various aspects of remodeling and building in the construction field. Seldom idle, he always had some project he was working on, rather it be building decks, fences or interior remodeling of homes. Away from work, he would always be willing to improve his own surroundings using the skills he had. Bubba’s other talent was cooking. He loved to feed his family. Rather it be in the kitchen or the outdoor grill, he knew that when he was cooking, it usually involved friends and family alike that he would be surrounded by, which made the experience that much more for him. He loved his dogs with passion, even adopting a stray dog found along side of a road. Bubba was a man of strength. Very few people could say they could endure life, given the adversities he experienced, as well as he. His inner strength included being a “tell it like it is” character. Should you be genuinely loved by Bubba, he made sure you knew it, as well as, if he didn’t, you knew that too. Later in life, Bubba began to know Jesus Christ. He knew the power of God and, several time, revealed to many how he felt God was working in his life. He attended Life Fellowship Church in Kennedale. Bubba is preceded in death by his parents and sister, Brenda Feaster. Bubba is survived by his wife, Kim, sons Josh Feaster, James Feaster, Kasey Dearick and Hunter Maynard; daughters Ashley and Alisha Feaster, brothers Billy and James Feaster and Billy Rodriguez; sisters Beverly Feaster and Raylynn Miller; father-in-law Ron Roudon, mother-in-law Larraine Roudon; sister-in-law’s Sharon and Patty Feaster as well as his dogs, Brody, Crickett, Ginger and Stella. Bubba was an amazing man. He lived hard and loved harder. To those who knew and loved Bubba, he has imprinted and enriched their lives forever more and, not only will forever be remembered, but missed.

The family of Bubba Feaster created this Life Tributes page to make it easy to share your memories.

Send flowers to the Feaster family.