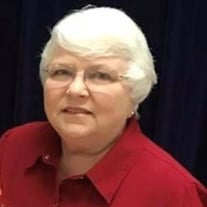 Carol Cronkrite, 74, went to be with the Lord on February 27, 2021. She was born in Fort Worth, Texas on March 15, 1946. She was the oldest child of Harold and Doris Renfro. Carol grew up on an egg farm in Lillian, Texas. As a young girl, she would babysit her three younger siblings, Lynn, Terry, and Tim while her parents worked in the chicken houses. By the time she was 10, she had learned how to cook and would assist her mother by preparing the meals for her family. Carol attended Alvarado High School where she graduated in 1963. She was an exceptional student who excelled in athletics and academics. Carol was loved by everyone in school. She was a joy to be around because of her bubbly personality. She was a cheerleader, class officer, homecoming queen, national honor society member, and was on the basketball team. Her favorite activity was being a part of the rodeo team, the Alvarado Range Riders. Carol and her horse Tonto would barrel race during the rodeo playdates. She loved going to school, attending church functions, and hanging out with her best friends Lynn, Susie, and Darlene. During her freshman year of high school, she noticed that Jackie Cronkrite, the boy she had known since elementary school, grew up into a good-looking, hardworking, all-round, awesome guy and she fell deeply in love. While dating, Jack and Carol loved to hang out with friends on the square in Alvarado and sometimes as a special treat, they would go see a movie at the Esquire Theatre in Cleburne. Jack and Carol were married on November 16, 1963. They started their lives together in Fort Worth and eventually settled for good in Arlington in the early 1970s. Right after they married, Carol got a job at Williamson Dickies in Fort Worth. After several years, she took a break and became a stay-at-home mother. When her children started school, she went back into the workforce in the medical field. Over the years, she did medical billing and accounts payable for a pulmonologist and a group of neurosurgeons. In 1992, Carol got a job at Cook Children’s Hospital. She started out working as an administrative assistant for the Medical Director of Cardiovascular Services. Her favorite duty was to plan the annual reunion for the children that had heart surgery. She loved to attend this function because she got to see all the little children who overcame their heart problems and were leading a healthy life. After the retirement of the medical director, Carol moved over to the surgery scheduling department. Carol was a proud and dedicated employee of Cooks Children’s for 25 years. She retired in September 2017 at the age of 71. In March 1967, Jack and Carol welcomed their first child and son, John David. Three years later, in Jan 1970, they had their daughter Jaime Lynn. Carol loved her children deeply. They were her number one priority and she was their biggest cheerleader. She attended every football, soccer, volleyball, band, and drill team activity they participated in. Carol was the go-to girl for English papers. She was a master at turning a two-page paper into a four-page paper. Carol was also an excellent seamstress. She made the majority of her children’s clothes putting a lot of hard-work and love into everything she made for them. Her biggest accomplishment was her daughter’s wedding dress. It took her 6 months to make and she sewed every bead on by hand. It was truly stunning and a labor of love. In 1996, Carol became Nana. Over the next 10 years, Carol was blessed with 5 granddaughters, Jordyn, Ashley, Morgan, Jadyn, and Jaley. Those girls were her world. She attended every function from softball games, soccer games, dance lessons, school programs, and concerts. She was their biggest supporter in everything they participated in. All five girls had a special bond with their Nana, and they all considered her their hero. She surrounded them with positivity, guidance, and wisdom. She helped formed them into the strong, independent women they are today. Carol is survived by her daughter Jaime Lynn and son-in-law Jadey James of Kennedale; Daughter-in-law Sandy Cronkrite of Arlington; Granddaughters, Jordyn, Jadyn, and Jaley James of Kennedale; Granddaughters Ashley and Morgan Cronkrite of Arlington; Sister Lynn Nall of Grandview; Brother Tim and Vanessa Renfro of Lillian; Brother Terry and Mary Renfro of Austin; Sister-in-law DeDe Mitchell and partner Bret Carter of Benbrook; Sister-in-law Carla Brannan and partner John McCluskey of South Hadley, Massachusetts; Brother-in-law Randall Hess of Alvarado and many nieces and nephews. She was proceeded in death by her loving husband of 57 years, Jack Cronkrite; her son, John David Cronkrite; Parents Harold and Doris Renfro; In-laws Johnny and Jacqueline Cronkrite. Carol was a shining light that would draw people to her like a magnet. Her positivity and kindness put a smile on everyone’s face. She loved to be around people and she never met a stranger. When people would talk to Carol, she would give them her undivided attention because she truly cared about what they had to say. She made everyone feel special. She taught her children and granddaughters to look for the positive in every situation and have a can-do attitude. She would always tell them, “You got this, go forth and conquer!” Nana, even though you are no longer with us, we are going to conquer the world because your spirit and love is part of us. Stream link: https://video.ibm.com/channel/SCbG6n7Ep9e

Carol Cronkrite, 74, went to be with the Lord on February 27, 2021. She was born in Fort Worth, Texas on March 15, 1946. She was the oldest child of Harold and Doris Renfro. Carol grew up on an egg farm in Lillian, Texas. As a young girl,... View Obituary & Service Information