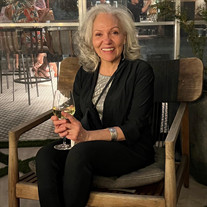 CAROL H. YOUNG, 62, went to be with the Lord on Saturday, April 30, 2022. A resident of Grand Prairie, TX, Carol was born in Bulawayo, Rhodesia, Africa (known today as Zimbabwe) to the parentage of Gerardus Van Sleeuwen and Rose Johnson-Van... View Obituary & Service Information

The family of Carol Young created this Life Tributes page to make it easy to share your memories.

Send flowers to the Young family.