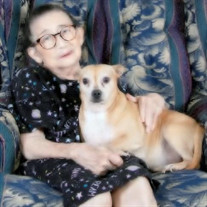 Clemencia C. Flores, 81 of Arlington, Texas, beloved mother, sister and aunt lost her long battle with Rheumatoid Arthritis and a short bout with a stroke. She passed away peacefully at Mansfield Methodist Hospital surrounded by the ones she laughed/joked with, cared for and loved on October 28th, 2019. She was predeceased by her husband, Ben Flores Jr., sisters, Victoria Soto, Alejandra Alcozer, Trine Regino, brother Lupe Cortez, and parents Micalea and Frutoso Cortez. She was born in Buda, TX., moved to Hale Center, Texas where she attended the Hale Center Independent school district. On February 12th, 1954 she was wed to Ben Flores Jr. She moved to Lubbock, TX., in 1981 where she was employed by Yellow House machinery. In 1999 she moved to Arlington, Texas. She is survived by her only son, Sam Flores of Arlington, Texas., and sister Marta Leija of Albuquerque, NM., and brother Pete Cortez of Odessa, Texas as well as many numerous nieces and nephews and many other relatives and friends and her pets, Altuve and Romo. A memorial service will be held at St. Joseph’s Catholic Church of Arlington, Texas at 11:00 am sharp on Saturday November 2nd, 2019. Clemencia or Clem for short had a zest for life, she truly enjoyed watching America’s Team, the Dallas Cowboys, Texas Rangers and Texas Tech Red Raiders. She was a jokester, and prankster. She excelled at the art of rapport regardless of who she met. She enjoyed traveling and meeting people. She was a tiny person whose heart equaled/surpassed her four-foot stature, and was one very strong- and strong-willed woman. Clem was a master in the kitchen, an excellent cook whose dishes left one licking their fingers and wanting more. Clem had an immense love and patience for dogs especially Cuchi, Raider, Chico, Tuffy, Beau, and her current furry friends Romo and Altuve.

Clemencia C. Flores, 81 of Arlington, Texas, beloved mother, sister and aunt lost her long battle with Rheumatoid Arthritis and a short bout with a stroke. She passed away peacefully at Mansfield Methodist Hospital surrounded by the ones she... View Obituary & Service Information

The family of Clemencia C. Flores created this Life Tributes page to make it easy to share your memories.

Send flowers to the Flores family.