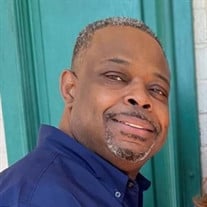 Danny Smith was known as “Danny Ray “to family, and as “Man” back home in Thomasville, Georgia to family and friends. Danny Smith was a man, husband, father, and friend. Danny arrived on November 13, 1969 and departed on June 11, 2021. He was born in Thomasville, Georgia to Daniel and Mary Lee Smith. Danny had the most electrifying spirit that would light up any room. His humorous personality would leave those in his presence laughing in stiches. He had an infectious laugh that would stay ringing in your ear. Danny was in a class all by himself, every task he performed was done in the spirit of excellence. He had a “heart of gold”. Danny served his community by feeding the homeless, coaching little league baseball, and being a good samaritain when given the opportunity. Danny attended Thomasville High School, in Thomasville Georgia. He graduated from the class of 1988. After graduating from high school, he attended the University of Georgia to pursue a medical degree. He later joined the U.S. Navy, and was stationed in Stockton California. He also graduated from Hi Tech Institute Surgical Technician Program in May of 1988. Danny later explored the field of law enforcement. He graduated from Los Medanos Police Academy on May 25, 2001 in Pittsburgh California. He was employed by the Richmond California Police Department. Danny later returned back to his first love of working in the Medical Field. Danny flourished in his career as a surgical technician. He was well respected in the medical community. He was sought after by many doctors and recruiters to be a part of their surgical team. He was currently employed by UT Southwestern in Dallas Texas. Danny received great joy by working as a surgical technician and helping people daily. While Danny was completing his education and serving in the U.S.Navy, he met the love of his life, Kimberly Jones of Oakland California. It was love at first sight and the couple married on June 15, 1996. They were married for 25 years. From this union was the late Kayla Danyelle, Kayla Faith, and Mathew Vernon. Danny was the epitome of a “family man”. He loved his family with all his heart. Danny planned numerous vacations, family dinners, and barbecues. His impromptu spirit leaves many family and friends with great memories. Danny opened his home to many. Everyone loved coming to his home for great food, fellowship, and entertainment. Danny lived his life to the fullest. He loved hard, worked hard, and gave his very best! Danny will be lovingly remembered by his wife, Kimberly; children: Kayla and Matthew, sisters; Sandra Griggs, Lavern Smith, and younger brother Travis Smith; as well as numerous other relatives and friends. He is preceded in death by his grandparents, Doshie Reddick, Earm Reddick, Abe Smith Sr., Johnie Mae Smith. His first-born daughter Kayla Danyelle Smith. Danny will be missed, but never forgotten. His example of “loving family” will be our blueprint to follow and to forever carry out his legacy. Link for Service: https://video.ibm.com/channel/23866912/video/clfi9d