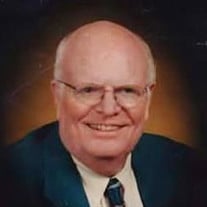 David Charles Anderson, 77, was born June 10, 1942 in Lubbock, TX to Douglas Franklin Anderson and Nelma Charlene Boggus Anderson. He gave his life to Jesus when he was 10 years old and followed Him the rest of His life. He met Mary Beth Hailey at Mansfield High School and fell in love with her immediately, and she with him. They married March 31, 1961 in Granbury Texas. They were blessed with three children, eight grandchildren, and 2 great-grandsons. His love, devotion and service to his family followed closely after his love for his God. Dave owned his own business, Dave Anderson Ad Service, since 1975. He provided well for his family doing newspaper ads for independent grocers. Dave was active in First Baptist Church Mansfield, becoming a member in 1974. He served as a deacon, trustee, and on two building committees. Also his high honor and love was for teaching God’s Word, and he taught adult Bible classes for 32 consecutive years. Dave also served his community as a trustee on the MISD school board for 15 years and as a city councilman for ten years as well as on the city parks board. Dave also served as a part-time magistrate for the City of Mansfield for several years. He was a charter member of the Mansfield Rotary Club, and also helped start the Kiwanis Club. He coached PeeWee sports and cheered his children and grandchildren on in all their activities. David was preceded in death by his parents, grandparents, two sisters, and one grandson, Caleb Reagan Anderson. He is survived by his wife of over 58 years, Mary Beth Anderson; daughter Kathy Wilshire and husband Larry, son Randy and wife Teresa, son Brady and wife Jennifer; grandsons Andy Wilshire and wife Allison, Matt Wilshire and wife Lindsey, Brandon Anderson and wife Rachael, and Josh Anderson; granddaughters Hailey Wilshire, Hannah Wilshire, and Terran Anderson, and great-grandsons Liam and Noah Anderson. Burial will follow memorial service at Rendon Cemetery.

David Charles Anderson, 77, was born June 10, 1942 in Lubbock, TX to Douglas Franklin Anderson and Nelma Charlene Boggus Anderson. He gave his life to Jesus when he was 10 years old and followed Him the rest of His life. He met Mary Beth Hailey... View Obituary & Service Information

The family of David C Anderson created this Life Tributes page to make it easy to share your memories.

Send flowers to the Anderson family.