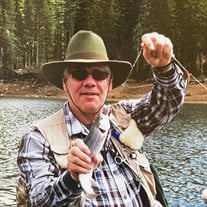 David Autrey Crocker 69, of Mansfield, Texas, passed away on February 24th, 2020 in Mansfield, Texas. Memorial services will be held at 1pm on March 6th, 2020 at First United Methodist Church, 122 North Center Street, Grand Prairie, Texas 75050. Arrangements are by Blessing Funerals and Cremations. Born in Denver, Colorado to Richard and Joan Crocker on April 22, 1950, Dave attended grade school in Denver and was accepted to Shattuck Military Academy in Faribault Minnesota. At Shattuck, while completing high school, he honed his hockey skills, acquired the nickname “Society Man” and earned medals for his marksmanship. After graduation, he attended Colorado State University where he was active in the Alpha Tau Omega fraternity, elected to the Engineering Honor Society and earned his bachelors in Industrial Construction Management. In 1973, he moved to Texas to begin his career, and even played in the amateur men’s hockey league occasionally with members of the Blackhawks and Red Wings farm teams. Dave was hired by Texas Industries as a civil engineer and was active in ASTM (American Society for Testing and Materials), ESCSI (Expanded Shale Clay and Slate Institute) and ACI (American Concrete Institute) where he was nominated and elected as a fellow by his peers. Throughout his career, he published several articles in professional journals and served on governing committees to help shape industry standards. He taught in the engineering department at the University of Texas at Arlington as an invited professional instructor and worked diligently to advance the field through his six patents and the creation and development of “Maximizer.” Mentorship was also very important to Dave as he was close with his own mentor Cedric Wilson, whom he met early in his career. He was always happy to return the favor to anyone who needed help and was affectionately known to many as “Dr. Dave.” In 2002, he was awarded the Cedric Wilson award for outstanding contributions in the areas of innovative materials and design in lightweight aggregate, lightweight concrete and lightweight concrete masonry, a testament to his dedication and contribution to his field. While “Dr. Dave” was a large presence in the concrete and construction world, he was known to the rest of his friends and family as “Daddy Dave.” He became “Daddy Dave” in 1980 with the arrival of his daughter Gentry, whom he shared with former spouse Susan Gainer. His “Punkin” was the light of his life and he talked about her to everyone he met. Through water skiing, snow skiing and learning to drive cars, Gentry and her friends knew to call on Daddy Dave no matter what – you would get the lecture, but after he fixed what was wrong. He beamed every step of the way as the little girl who said she was going to be a doctor graduated from high school, college, medical school and achieved her dream of becoming a neurosurgeon. When Robert came into her life, he gained a son and a fellow tool guy to hang out and fix things with. He was so excited that she had a good husband who would be there for her when he could not. That excitement was only topped by the arrival of his two grandchildren. In 2008, he met the other light of his life, Charlaine. Together they began a wonderful new chapter of his life. Scuba diving, fishing, working on the house at the lake- anything that they could do together. Char even got him to help with a little quilting! With their marriage, “Daddy Dave” was quickly promoted to “Pop” and he and Mimi were in high demand with adoring grandchildren. Dana, Jason and Jenny welcomed him with open arms into their family, and he happily assumed the role of “Daddy Dave” with them- repairing, mentoring and lending an ear or a tool whenever needed. As the number of grandchildren grew, so did his excitement at being a grandfather and getting to play. He was happiest watching his children and grandchildren with his “Sweetie” by his side. Dave was preceded in death by his father Richard Crocker. He is survived by his wife Charlaine of Mansfield, Texas; his daughter Gentry Savage and husband Robert of Knoxville, Tennessee; step-daughter Dana Vardeman of Wichita Falls, Texas; step-son Jason Vardeman and wife Jenny of Cibolo, Texas; grandchildren Jack and Virginia Savage, Brynlee Skelton, Jhett and Jentry Miller and Easton Vardeman; his brother Bruce Crocker and wife Joyce of Broomfield, his brother Doug Crocker and wife Linda of Granby; nephew Jeff Crocker and wife Megan, nephew Zach Crocker and wife Becky, niece Lindsay Crocker and his mother Joan Crocker of Granby. Memorials may be given to: • Red Lake Fishing and Hunting Club to help complete Dave’s “Dam(n) Project” Red Lake Fishing and Hunting Club, Inc Dave’s Dam Project PO Box 1651 Fairfield, Texas 75840 (memo line Dave’s Dam Project) • Faith in Practice - https://faithinpractice.org/ , a surgical services mission program providing care to the underserved in Guatemala.

The family of David Autrey Crocker created this Life Tributes page to make it easy to share your memories.

David Autrey Crocker 69, of Mansfield, Texas, passed away on...

Send flowers to the Crocker family.