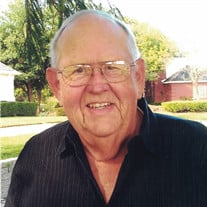 Donald Walter Wagner died unexpectedly at his home in Mansfield, Texas on Saturday, August 25, 2018. Don is survived by his Son Mark Wagner and wife Donna Jones of Ft. Worth, Texas; His Daughter, Donna Moore and Abey Colon of DeRidder, Louisiana; His Granddaughter, Jennifer Moore and Keith Smith and Great Granddaughter Madison Boring of Singer, Louisiana; And many more relatives, too numerous to count. He was the “Wagner Patriarch”. He is preceded in death by his parents, Cosmos E. Wagner and Lourene C. Wendler Wagner; His brothers, Elmer H Wagner, and Orville E Wagner; And his Dear Wife of 63 Years 9 Months 14 Days and 3 Hours, Audrey Pauline George Wagner. Don was born on January 16, 1930 in St. Louis, Missouri. He graduated from Riverview High, St. Louis and then went on to Washington University earning an Associates degree in Finance. He married Audrey in 1950, who coincidentally, her sister Evelyn was married to Don’s brother Orville. Don was in the Army from 1951 to 1955 as a Master Sargent. He was called back to duty for a short time while in the Active Reserves during the tearing down of the Berlin Wall. Don started in the Finance Business in 1955 with Household Finance, then moved to Texas in 1960 and worked with GFC Finance. He was in the Finance Business for over 21 years, then transitioned into the Credit Union industry, 1st with Texins Credit Union-Don was considered the Godfather of the Mortgage Industry. In 1982 while working at Colonial Savings in Ft. Worth, Texas, he convinced the CEO Jimmy DuBose, he could make home loans & service them for Credit Unions, thus in 1982 CU Members Mortgage evolved and now is one of the largest companies in the USA. Don was Vice President of CU Members from 1987 until he retired in 1998. Don would say, “If you ever made a home loan at a Credit Union, it started with my vision”. Don was a sharp businessman, loyal friend and devout Christian. Don was active in his church, St. John Lutheran Mansfield, Texas. Previously he was a member of Walnut Creek Country Club and loved the game of golf. He taught his granddaughter Jennifer to play at the age of 13. She later won Jr. PGA tournaments in High School in Louisiana. Don’s love for his Great Granddaughter Madison was immense. Last year he traveled to Puerto Rico to watch her Surf. Don Wagner truly loved his family. His guidance, wisdom and inspiration will be terribly missed. Don loved to dance; ask anyone. He frequently went dancing at Metro and Tanglefoot Dance Clubs, calling his daughter sharing the music of the great bands he was dancing to that evening. Don and Audrey loved to travel, they danced around the world on over 17 cruises and 5 continents. All are welcome to attend and celebrate Don’s life at St John Lutheran Church, Mansfield, Texas. In lieu of flowers, please send donations to St John Lutheran Church, Music Department. The family would like to thank the caregivers who provided much needed support; Darla Collins who took care of mom and dad prior to their passing and Teresa Machado who assisted with dad this last month; the staff at MedCity Arlington hospital for their care and dedication; And the numerous doctors who dedicated their medical talents to his care. Most importantly, we would like to thank all the Friends of Dad’s, at church and neighbors, who have been a very important part of his life and provided tremendous care and support throughout the years.

The family of Donald Walter Wagner created this Life Tributes page to make it easy to share your memories.

Donald Walter Wagner died unexpectedly at his home in Mansfield,...

Send flowers to the Wagner family.