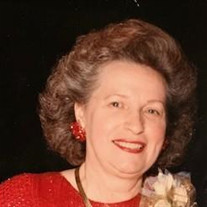 Doris’ journey began on May 16, 1937 in the small East Texas town of Grapeland. She was the only child of William Preston Kyle and Katherine Lucille Beazley Kyle. Doris’ parents divorced when she was a young child. Although that separation brought her pain, it also brought two wonderful additions into her life, her beloved brother William Paul “Sonny” Kyle and sister Ann Kyle Scoggin. Doris loved these two siblings and the resulting nephews and nieces. Being raised as an only child by a single mother brought many hardships along their way. Doris and her mother became fiercely united. Doris’ mother, grandparents, aunts, uncles, and cousins all played a big part into molding Doris to be a spiritual, kind, and loving woman. Doris met the love of her life, Henry Spence, when she became his third choice for a double date that Henry had planned with another couple. It was love at first sight. Henry and Doris married on June 23, 1956. When they married, Henry was still an aerospace engineering student at Georgia Tech. The two traveled quarterly back and forth between Georgia and Texas while Henry was a co-op student. Henry and Doris desperately wanted to start a family, but Doris was unable to carry their babies to term. God found a way for Henry and Doris to become parents. They adopted Stephen Lee Spence in August of 1964 and then Susan Lynn Spence in October of 1968. Both lucky babies were adopted from The Edna Gladney Center of Ft. Worth. Doris was a devoted wife to Henry and a loving and dedicated mother to Steve and Susan. Henry and Doris’ treasured family grew when they gained a son-in-law Daniel Williams, a daughter-in-law Starr Gacsal Spence, and three beloved grandsons, Michael Schelp, Jonathan Schelp, and Evan Williams. Doris always wished for a family of two sons and two daughters. She remarked many times that she got her wish when Steve and Susan married their spouses. Doris was a lover of all animals. She had countless rescues of cats and dogs throughout her lifetime. Animals brought a tremendous amount of joy to Doris’ life and she doted on every animal she encountered. Doris will be remembered for her beautiful smile, her sweet southern drawl, her devotion to animals, and her ability to never meet a stranger. Doris was called home on January 9th, 2020 and reunited once again with her beloved Henry. In lieu of flowers, contributions to Mansfield Animal Care and Control or your favorite animal charity would be appreciated.

Doris&#8217; journey began on May 16, 1937 in the small East Texas town of Grapeland. She was the only child of William Preston Kyle and Katherine Lucille Beazley Kyle. Doris&#8217; parents divorced when she was a young child. Although that... View Obituary & Service Information

The family of Doris Neal Spence created this Life Tributes page to make it easy to share your memories.

Send flowers to the Spence family.