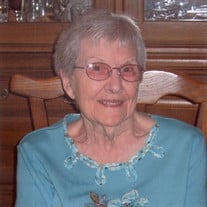 Mansfield, Texas - Eleanor B. Severs, 95, passed away December 28, 2018. Services: Visitation, January 4, 2018, Funeral, January 5, 2018 at O'Bryant-O'Keefe Funeral Home, Pascagoula, Mississippi. Following the funeral service, burial will be at Machpelah Cemetery, 5112 Machpelah Road, Pascagoula, Mississippi. Son-in-law, Jackie Bryant, will officiate the services. Eleanor Bernice Severs was born July 10, 1923 in Linden, Texas to Irene and Bernard Powell. As the second child of five children born to this couple, she grew up loving to read, working in the field picking cotton and learning to put others first. Bernice married Curtis "Red" Severs on May 31, 1942 while living in San Diego, California. Bernice was helping her grandmother run a boarding house where "Red" was one of the boarders. Born to them were three girls and one boy. Bernice lived with her family in Pascagoula, Mississippi, for more than fifty years. She worked for the family business, Red's Refrigeration and Air Conditioning, as receptionist, secretary and bookkeeper. Bernice lived her life for her family, always putting them first. She was a member of Eastlawn Methodist Church. After her husband died in 1981, she lived in Pascagoula until 1998 when she moved to Houston, Texas, to live at The Terrace, a senior adult retirement facility. In 2005 she moved to Arlington, Texas, where she lived at The Arbrook, another senior adult retirement facility. In 2007, she moved to Mansfield, Texas where she lived for almost 10 years as a member of Magnolia Heights Retirement Community. All of her years in these different facilities were memorable to her because of the residents who became her friends. Bernice passed away while living at Mansfield Medical Lodge under the care of New Hope Hospice. She was so grateful for the care given to her at such a difficult time of her life. Perhaps her legacy is that those who met her said that she was the sweetest person they had ever met. Even those who took care of her physical and medical needs spoke of her in this way. The therapist at Mansfield Medical Lodge, who had worked so diligently with her to help her regain mobility came to visit after she was no longer able to attend therapy sessions. Preceding her in death were her son, Curtis Alan Severs, husband, Curtis Charles "Red" Severs, son-in-law Ross Rogers (Suzette's husband), grandson Art Rogers (Annette's son and Bonnie's husband) and her four siblings, Charles, Maureen, Bernadine and Marlette. Survivors: Annette Carr (Bill), Suzette Rogers, and Casandra Bryant (Jackie) are her surviving children. Four granddaughters have been born to her daughters: Christy Dove (Don). Jenny Maus (Randy), Liz Rogers (Jeff), and Candace Peters (Scott). Seven great-grandchildren have been born to her granddaughters and grandson. There are numerous other grandchildren, and great-grandchildren.

The family of Eleanor Bernice Severs created this Life Tributes page to make it easy to share your memories.

Send flowers to the Severs family.