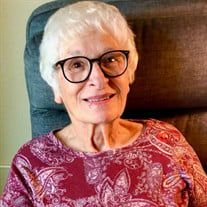 Emma B. Lyon, 83, is now in the hands of the Lord. She went home on December 18, 2020. Emma was born to Jesus and Fannie Benavides on May 19, 1937 in Corsicana, Texas. Emmy Lou, as she was known in her younger years, was something of a tomboy growing up as the youngest of nine children on the family’s farm and later when they moved to Fort Worth. She, along with her sister Ann, attended Our Lady of Victory (OLV) Academy, an all-girl Catholic school administered by the Sisters of Saint Mary of Namur. She graduated high school from OLV in 1955. Early on Emma wanted to be a nurse and volunteered as a Candy Striper in the emergency room at Saint Joseph Hospital. However, after fainting at the first sight of blood she realized that was not the path for her. She worked as a receptionist, a secretary, and a teacher’s aide. Finding her calling in the classroom, Emma received her bachelor’s degree from Texas Wesleyan College. She later earned her master’s from Texas Christian University followed by bilingual certification from the University of North Texas. From teacher’s aide to elementary and bilingual teacher, Emma worked in Fort Worth schools for 30 years. Her greatest joy was in teaching young children and mentoring young teachers. She often told stories of meeting former students later in life, thanking her for her role in their growth and how they felt her kindness and effort had provided a foundation for their adult lives. She reveled in hearing of her students’ successes and achievements. She was honored as site teacher of the year multiple times during her career. Emma enjoyed many and varied past times throughout her life. Early on during marriage she, her husband Bill, and their son Will enjoyed many car and camping trips taking their trailer to many destinations throughout Texas and neighboring states. One memorable trip included a drive to Miami and a short flight to the Bahamas. Later, Emma enjoyed traveling to visit her son who seemed to move someplace new every few years. Memorable trips included Seattle and the San Juan Islands of Washington state, Vancouver British Columbia, Albuquerque and Santa Fe New Mexico, Las Vegas, San Francisco, Puerto Nuevo and Ensenada Mexico, and many trips to San Diego after Will settled there in the late 90s. Most recently, she revisited her camping days and joined her son, his wife Heidi, and grandson along with Heidi’s family during local RV trips to the beach. Emma loved card games and they were a hobby throughout her life. She made many friends and enjoyed the fellowship of playing bridge and canasta. Later she added Skip-Bo, Uno, and hand and foot to the list. She was also a voracious reader and would rarely be found without a romance novel or two in her purse. And certainly, there was always a stack of paperbacks by her chair at home. Even in retirement she was an avid teacher… whether it was a new card game or volunteering to teach Spanish classes to fellow retirees, Emma was always known as a friendly and welcoming presence in her community. She also grew to love gardening and birdwatching, especially after moving to San Diego. She delighted in seeing her plants flourish in the Southern California sunshine and taking note as to which birds came to visit her balcony garden and birdfeeders. Although teaching was her passion, family was paramount to Emma. She was so proud of her son, grandchildren, great grandchildren, and more recently great, great grandchildren! She especially enjoyed the holidays which often included trips home by Will and his family and spending Thanksgiving and Christmas with family. She valued her time seeing her grandson Willson and was very happy to be able to spend so much time with him since moving to San Diego. No small feat for a lifelong Texan who had never lived outside a 30-mile radius from her birthplace. Emma is preceded in death by her parents Jesus and Fannie Benavides, brothers Paul, Gabriel, and Mart Benavides, and beloved husband William F. Lyon, Jr. Emma will be missed by many, but especially by her family: her brother Roy, sister Ann, son William F. Lyon, III and his wife Heidi, step daughter Debra (Lyon) Cox and her husband Gary, and grandson Billy Jack Cox and his wife Marci, grandson William F. Lyon IV, granddaughter Jeri Jo Long and her husband Tobin, great granddaughter Rachel Carnes and her husband Christian, great granddaughters Lauren and Emma Cox, great-great grandchildren Mia and Max Carnes, and many, many cousins, nieces, and nephews. Emma’s favorite charity was St. Jude's Children's Hospital.

Emma B. Lyon, 83, is now in the hands of the Lord. She went home on December 18, 2020. Emma was born to Jesus and Fannie Benavides on May 19, 1937 in Corsicana, Texas. Emmy Lou, as she was known in her younger years, was something of a tomboy... View Obituary & Service Information

Send flowers to the Lyon family.