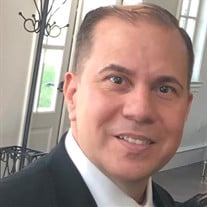 On Tuesday, September 28, 2021, Erich Kurt Erdmann, loving husband and father of two children, passed away at the age of 52. Erich was born on April 7, 1969 in Mitchell, South Dakota to Ralph and Joan (Warner) Erdmann. Erich served in the United States Army from 1986 - 1992 and was deployed for Desert Storm. He received his bachelor's degree from the University of Texas in Austin in 1993, and went on to earn his MBA from Texas State University in San Marcos in 2002. He practiced medicine for the majority of his career as a Registered Nurse in Washington and Texas states, and most recently was employed by the US Department of Veterans Affairs in Dallas for the past 8 years. His faith was important to him and was an active member of St. John Lutheran Church in Mansfield. On July 3, 2010, he married Kimberly Slovacek, and together they had two sons, Reagan and Landry Erdmann. Erich had a passion for life, and was known for his ability to command a room with infectious laughter. If Erich was laughing, anyone in the room couldn't help but join in the fun. He loved to bring joy to any situation, from his colorful banter he'd shout at the players in baseball games, to cracking jokes on the ascent up a rollercoaster that, "Uh oh, sir? Sir?! A screw is loose! A SCREW IS LOOSE!" He was known for his quick wit, his genuine smile, and his kind and compassionate spirit. Erich was a deeply devoted family man, and did everything he could to ensure that his family members were taken care of. Through the 1990s, Erich took a lead position in raising his siblings Joni and Karl when tragedy struck the family. From there, he went on to have his own two sons, and took a special interest in their education in every way, ensuring that every night he helped them with their homework, and reinforced their learning with educational exercises far beyond the typical study routines of children. If he wasn’t helping them study, he was teaching them the mechanics of every sport he could think of, showing them the proper ways to throw a baseball or football, as well as how to most accurately swing a baseball bat. Erich loved to play games, and particularly enjoyed attending and playing a wide variety of sports. Erich was devoted to cheering on family members in their sports endeavors, loved watching the Texas Longhorns and Cowboys play, or just throwing around the football in the front yard. Erich was preceded in death by his father, Ralph, and his 4 grandparents Albert, Norma, Ralph, and Edith. He is survived by his mother, Joan (stepfather Roger), wife Kimberly, their two children, Reagan and Landry, his brothers Karl (wife Carlie) and Siegfried, his sisters Joni and Roxanne (husband Steven), and many cousins, aunts, uncles, nieces and nephews. A funeral service will be held on Monday, October 4th, 2021 at St John Lutheran Church at 3:30 p.m. He was an advocate for his children’s education. In his honor, donations for their education will be accepted in lieu of flowers for his funeral: https://gofund.me/649054bb

On Tuesday, September 28, 2021, Erich Kurt Erdmann, loving husband and father of two children, passed away at the age of 52. Erich was born on April 7, 1969 in Mitchell, South Dakota to Ralph and Joan (Warner) Erdmann. Erich served in the... View Obituary & Service Information

The family of Erich Kurt Erdmann created this Life Tributes page to make it easy to share your memories.

Send flowers to the Erdmann family.