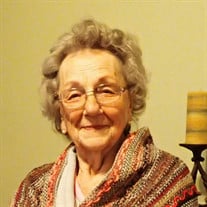 Evelyn Kubala Scaff was born in Williamson county August 17, 1927. She spent most of her childhood on a farm in Tioga, Texas, with her mother father and 9 siblings. She graduated from Pilot Point High School before moving to Dallas, where she attended business school and got a secretarial job. A coworker introduced her to Ed Scaff, recently released from a tour a duty with the Navy. Soon thereafter they initiated a marriage that would span 61 years and result in 6 children. They lived many years in Grapevine, where all the children graduated. The family was active in the school and at St. Francis Catholic Church, where Evelyn served many years on the Altar Society. After Ed’s retirement from American Airlines, they lived on lake LBJ for a period before returning to the DFW area. Evelyn was an accomplished cook, gardener, card player, and quilter. She and Ed enjoyed travelling during their life together, the bus trips to Marksville being among their favorite. Recently, she has been very active at St. Jude Catholic Church and SPJST Lodge 92. She thoroughly enjoyed quilting with friends at St. Jude, playing Tarok at the SPJST hall, and traveling to Windstar with friends. Her love was cooking and especially baking for others. Evelyn lived a very full life, foremost loving her family. She is preceded in death by her husband, Edward Scaff, her parents Anna and John Kubala, and her 2 sisters and 7 brothers. Evelyn is survived by her 6 children and their spouses, 14 grandchildren and 13 great grandchildren: son Bradley Scaff, wife Jane, grandchildren Sam Scaff and Joe Scaff, wife Mandy, and their children Mitchell, and Maxwell; granddaughter Erika and her children Angela, Shatoria and Caleb, Jennifer and Pat Totman and their children Clair and Henry; daughter Gayle (Scaff) Krengel, granddaughter Kristina, and her daughter Elsa; Bruce and Rose Scaff, Grandsons Stuart Stuart, wife Amber, their children Dylan, and Sloan; Alec Scaff, wife Molly, their children Niko, McClane, and Capri; Jordan Scaff and wife Courtney; Brian Scaff, wife Cari, their children Foster, and Connally; Katrina (Scaff) May, husband Carl, grandchildren Karen and Andrew May, wife Briley; son Brent Scaff, grandchildren Hayden, and Hannah Grace. Kiyoko Makita was her Japanese exchange student daughter. In addition, she is survived by numerous nieces, nephews, cousins, and second cousins, all of whom she loved deeply. In lieu of flowers Evelyn requested that you make a donation to your favorite charity or St. Jude Catholic Church Building Fund, 310 Graves St., Mansfield, TX 76063.

Evelyn Kubala Scaff was born in Williamson county August 17, 1927. She spent most of her childhood on a farm in Tioga, Texas, with her mother father and 9 siblings. She graduated from Pilot Point High School before moving to Dallas, where... View Obituary & Service Information

The family of Evelyn Kubala Scaff created this Life Tributes page to make it easy to share your memories.

Send flowers to the Scaff family.