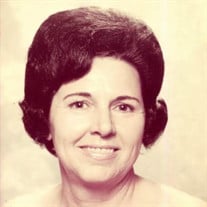 Faye Doris (Pressley) Ervin, 98, a loving caring Mother, Grandmother, Great Grandmother, Great-Great Grandmother, known to many as “Nanny”, passed from this earthly life, at her home on the “Hill” in Mansfield, Texas, in route to her heavenly home on the afternoon of May 14th, 2020. Faye was born to her father Thomas H. Pressley and Mother Cora (Long) Pressley, on February 12th, 1922 in Mansfield, Texas. Faye was one of eight children. She often said that as soon as she could walk her mother gave her a cotton sack so she could go to work. She was known for working hard, sharing what she had, and feeding everyone that came to her table. She took care of many people during her life, her immediate family, brother in-laws, nieces, nephews, and anyone else she thought she could help. Faye loved flowers and she also loved to fish. She always wanted to finish a meal with something sweet, and has passed that tradition to generations. Faye married Robert Henry (Wick) Ervin on December 5th, 1939, in Fort Worth, Texas. During the 1960’s and early 1970’s Faye owned and operated the Theater Café on Main Street, in Mansfield. Faye and Wick had three sons Robert Lee Ervin, John Will (Willie) Ervin, and Billy Wayne (Bud) Ervin. Faye was preceded in death by her husband Robert Henry (Wick) Ervin who died at their home on April 11th, 1993. Faye was also preceded in death by her father, mother, brothers, sisters, and granddaughter (Doris Louise Ervin). Survivors include: Sons; Robert Lee Ervin, and Wife Louise, John Will (Willie) Ervin and Wife Louise, Billy Wayne (Bud) Ervin, and Wife Sandra; (4) grandchildren, (9) great grandchildren, (5) great-great grandchildren; numerous nieces, nephews, cousins, and life long friends. Funeral: A graveside service will be held at the Mansfield cemetery, at 10:00 a.m. on Tuesday, May 19th, 2020.

The family of Faye Doris Ervin created this Life Tributes page to make it easy to share your memories.

Send flowers to the Ervin family.