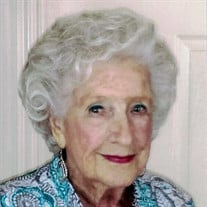 Frances Carroll Holdeman, of Mansfield, Texas, went home to be with the Lord on Saturday morning, October 27, 2018. She was 95 years old. Frances Mozelle Carroll was born at home in Barry, Texas, on December 9, 1922, to James William and Blanche Estelle Jordan Carroll. It was a time when most homes did not have running water inside. She attended school in Blooming Grove, Texas, graduating from Blooming Grove High School in 1939. She began her bookkeeper's career working for several area businesses, including the local cotton gin. She soon accepted a position at the Carrier Air Conditioning Corporation in Dallas, Texas. She lived at home and commuted to Dallas, Texas, accompanying her "little" brother Rudy on the Interurban train from Italy, Texas, to his stop in Waxahachie, where he attended high school. Frances loved her nieces and nephews as if they were her own children. She spent many weekends with her oldest brother, Sam, her sister-in-law, Lorraine, and their children, Carolyn, Bill, and Mary Frances. At Christmas time, they made cookies together, and enjoyed trips to Dallas to see the Christmas lights and visits to Santa. She loved to sew, and enjoyed making clothes for her nieces. Candy and Mary fondly remember skirts she created for them for Christmas, 1955. Instead of the usual poodle skirts which were popular, these skirts had nursery rhyme theme appliqués like "Hey diddle, diddle, The cat and the fiddle..." Frances eventually moved to Dallas, where she met her soul mate, Harold Weston Holdeman. They married in 1962. She finished the year on leave from Carrier pending the birth of their first child. She never returned after she was blessed with a baby girl of her own, Harriet Ann, in 1963. Frances considered her "only chicken" the greatest gift God ever gave to her. She utilized her creativity and skill as a seamstress by making all of her little girl's clothes. When the family moved to Mineral Wells, Texas, in 1967, Frances found a new church home, as well. She was a member of the First United Methodist Church in Mineral Wells, Texas, for more than 40 years. She loved her church family and, after relocating to the DFW area in 2000, continued to make the drive to Mineral Wells each Sunday until 2010. She was the third grade Sunday School teacher for many years. After "retiring" as a regular Sunday School teacher, she served in the office as an administrative assistant. She assisted with the United Methodist Youth Group while her daughter was in junior high and high school. Through the years, Frances served in many other volunteer capacities, including Stephen Ministries, delivering Meals on Wheels, and the after-school ministry "Little Folks". Frances truly had a heart for children and the community. She was a volunteer third grade teacher's aide at Lamar Elementary, a Girl Scout Troop Leader, and she gave time to the Hope Shelter for battered women and their children. Frances lost her beloved Harold in 1990. After tending to their 50 acre home site in Mineral Wells by herself for ten years, she decided it was time to be closer to her daughter. She moved to Kennedale, Texas in 2000, and then to Mansfield, Texas, in 2004. She discovered a new church start in Mansfield, New Day United Methodist Church. As a senior lady with white hair, she delighted in sharing knowledge and wisdom with younger members, as well as the intensity and dynamic of a brand new congregation. When the member ship of New Day was transferred to Community of Hope United Methodist Church, she was quickly welcomed and loved by many new friends. Frances also loved the familiarity of an old-fashioned county church that she found at Britton United Methodist Church, where she gathered many more who called her friend. Everywhere she went, she departed with these final words, "Remember, I love you, but God loves you more." Frances was preceded in death by her parents, James William and Blanche Estelle, brothers, William Erwin "Sam", James Doyle, Ray Dean, husband of 28 years Harold Weston, and just a few hours prior, her beloved brother Rufus Franklin "Rudy". She was also preceded by her cherished niece Carolyn Carroll Vinson, and her treasured nephew, Robert Doyle "Bob" Carroll. Frances is survived by her daughter, Harriet Ann Holdeman and husband Trent Blake, her step-son, Harold Weston Holdeman, Jr "Hal", and wife PJ "Jo", and her sister-in law, Billie Morris Carroll. Her surviving nephews and nieces are Bill Carroll and wife Jerri, Mary Waldrip and husband Ronnie, Carla Thomas and husband Dr. Robert, Candy Grady and husband Douglas, Courtney Carroll, Jim Carroll and wife Emily, Ray Carroll and wife Gayla, Tammy Carroll Jones and husband Dan. Frances has numerous great nieces and nephews and a host of dear friends. In lieu of flowers, memorial donations may be made to the Methodist Children's Home: 1111 Herring Avenue, Waco, Texas 76708.

Frances Carroll Holdeman, of Mansfield, Texas, went home to be with the Lord on Saturday morning, October 27, 2018. She was 95 years old. Frances Mozelle Carroll was born at home in Barry, Texas, on December 9, 1922, to James William and Blanche... View Obituary & Service Information

The family of Frances Carroll Holdeman created this Life Tributes page to make it easy to share your memories.

Frances Carroll Holdeman, of Mansfield, Texas, went home to be...

Send flowers to the Holdeman family.