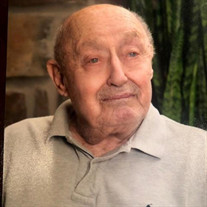 Francis Edward Staab, 91, went home to his Heavenly Father on September 3, 2020. Frank was born to Alphonse and Anna (Glassman) Staab on July 24, 1929 in Kansas City, Missouri. Frank attended DeLaSalle Military Academy where he lettered in basketball, baseball and tennis and served his school as one of the class officers. Frank’s education continued at Rockhurst College, in Kansas City, where he achieved a Bachelor of Science Degree in 1951. Frank was selected for “Who’s Who Among Students in American Colleges and Universities". From 1962-1990, Frank dedicated 28 1/2 years to the Ford Motor Company at the Kansas City Assembly Plant as an Industrial Engineer. A devoted Catholic, Frank loved his God and worshiped Him at both parishes, Nativity of the Blessed Virgin Mary in Independence, Missouri and St. Jude in Mansfield, where he was a member. Another love of Frank’s was golf. An avid golfer, he maintained a life-long, single digit handicap. He enjoyed taking trips with his wife, Loretta, to Florida and South Carolina where they both enjoyed the Retired Golf Group outings. Frank spent his last 5 years in assisted living at Discovery Village in Southlake, TX where he continued to make many friends. The staff will miss his smile, mischievous antics and clever comments. He made it so easy on the kitchen staff by ordering a hamburger every day! Frank is preceded in death by his parents, wives Doris Phillips Staab, Verna Lou Hansen Staab and Loretta Crandall Staab, brother Adrian Joseph Staab and sister Marjorie Staab Bevard. Frank is survived by his son, Kenneth F. Staab (wife Kerry), grandsons David L. Staab (wife Melanie), Michael F. Staab (wife Abby) and great-grandson William M. Staab. In lieu of flowers, the family of Frank Staab request memorial contributions to be sent to Camp Sweeney, 10687 F.M. 678, Whitesboro, TX. 76273

The family of Francis Edward Staab created this Life Tributes page to make it easy to share your memories.

Francis Edward Staab, 91, went home to his Heavenly Father on...

Send flowers to the Staab family.