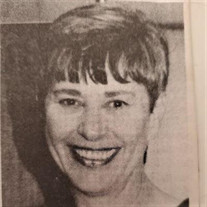 Mansfield, Texas – Gayle McLeod Tyler, a loving wife, mother, grandmother, and sister, passed away at her residence on March 29, 2021, surrounded by her family and dogs. She was the daughter of Willard V. and Katheryn McLeod of Fort Worth, the sister of Gary McLeod, of Tucson, Arizona, and the sister-in-law of Julie McLeod. Her children include Lisa Woods of Mansfield, and Brad Tyler and wife Desda of Grand Prairie. Grandchildren are CJ and Katie Woods. She was 79. Gayle was born in Wichita, Kansas, moving to Fort Worth when she was in the fifth grade. She graduated from Paschal High School in 1960 and from the University of Oklahoma in 1964, where she obtained a Bachelor of Science degree in Special Education. While there, she was active in the Delta Delta Delta Sorority. On March 27, 1964, she married Bobby Tyler, a graduate of Paschal High School, TCU, and the University of Texas Law School. They moved to Lubbock and had two children, Lisa Cay and Bradley Carl. She had a very rewarding profession as a Special Education teacher. Her career started in the Fort Worth Independent School District where she taught deaf education in a preschool classroom. After moving to Lubbock, she taught in an elementary classroom for deaf and intellectually disabled students. After having children, she took time off to raise them. In January 1988, she began teaching emotionally disturbed students at a residential psychiatric treatment center in the Keene Independent School District. She taught at the Odyssey Harbor Campus until its closure in May 1995. While there, she was named Teacher of the Year for 1990-1991 and 1995-1996. She was also awarded the Instructional Leadership Award, Effective Schools Project, from Tarleton State University in 1996. From there she moved to the Mansfield Independent School District until her retirement. She held teaching positions at the Oak Grove psychiatric treatment center, Ponder Elementary, Charlotte Anderson Elementary, and Kenneth Davis Elementary Schools. In April 1997, she was named the Kiwanis International Mansfield Teacher of the Month. Her love of travel took her all over the world. Some of her favorite destinations were Scotland, the ancestral home of the MacLeod clan on the Isle of Skye, and Africa, where she visited numerous countries. On one trip to Victoria Falls, Zimbabwe she visited an orphanage where she “adopted” the children there and continued to visit and support them until her passing. In lieu of flowers, the family asks for donations to the orphanage through GoFundMe.com/RoseofCharity. While busy teaching and traveling, she also was involved in raising, breeding, and showing their beloved Arabian horses. For over 40 years she worked tirelessly to educate others on the benefits of owning and perpetuating the Babson strain of Arabians. The family intends to have a Celebration of Life to honor her and celebrate a life well lived. Blessing Funeral Home 401 Elm Street Mansfield, Texas 76063 (817) 473-1555

Mansfield, Texas &#8211; Gayle McLeod Tyler, a loving wife, mother, grandmother, and sister, passed away at her residence on March 29, 2021, surrounded by her family and dogs. She was the daughter of Willard V. and Katheryn McLeod of Fort Worth,... View Obituary & Service Information

The family of Gayle McLeod Tyler created this Life Tributes page to make it easy to share your memories.

Send flowers to the Tyler family.