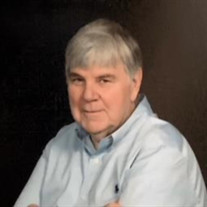 George Edward “Eddie” Jackson, 76, passed away Wednesday, November 17, 2021 with his devoted wife of 45 years, Ramona at his side. Visitation will be held at Blessing Funeral Home in Mansfield Friday, November 19, from 6pm-8pm, with the Rosary at 7pm. Mass of Christian Burial will take place on Saturday, November 20, 2021 at 11am at St. Jude Catholic Church in Mansfield. Masks requested at both services. Eddie was born in Ohio in 1945, the youngest son of Robert A. and Ethel (Hattendorf) Jackson. Along with his family, Eddie moved to Texas when he was two, growing up in River Oaks near Fort Worth and attending Castleberry High School. Being along the motorcade route for the tragic events in Dallas on November 22, 1963, an astute Eddie decided to steer clear of politics and become a beer delivery truck driver. After a brief but terrifying encounter with a robber while he was making a delivery, Eddie decided a new career path was needed. He then got into the necessary, but often overlooked, world of box manufacturing. During this time, Eddie was raising St. Bernards. An amiable guy, Eddie quickly made new friends at the box company including Clarence Doskocil. This connection would take Eddie down a path leading to love and happiness when Clarence recommended two of his nephews to help Eddie with his show dogs. Employing them led to Eddie meeting his future wife, Ramona Doskocil, who was widowed, and her other ten children. At the time he was also a member of Ramona’s church, St. Jude Catholic Church in Mansfield. When Eddie married Ramona, he became an instant step-father to twelve and eventually “Grandpa” to three more generations. His family, faith, dogs, golf, and the Cowboys and Rangers and other local sports teams, occupied his time. After a long career rising through the ranks and becoming foreman at Weyerhaeuser, Eddie retired. He worked for a while as an usher for the Fort Worth Cats which gave him more time with his adored and equally corny brother, Bob. But the vast majority of Eddie’s time this past decade or two has been pouring his heart into St. Jude. He took on many tasks including serving on the building committee. Eddie selflessly devoted many days to transporting food from the Food Bank to the St. Vincent De Paul Society food pantry and countless hours helping distribute food and other necessities to those in need. Additionally, he acted as the cemetery coordinator until the final weeks of his life. Eddie was preceded in death by his two brothers, Bill and Bob, stepson Danny Doskocil, grandson Jeremy Doskocil, and great-granddaughter Caroline Marshall. He is survived by his loving wife, Ramona; his stepsons Billy (Janee) Doskocil and Glen (Emilia) Doskocil; stepdaughters Lulu Welborn, Fran (Richard) Brown, Ann (Simon) Lugg, Donna Russell, Rita (Jim) Marshall, Bernadette (John) Shults, Monica (Phillip) Wiley, Marti (Mark) Dir nberger, and Chrissy (Jim) Bodsford; nieces Tifani Gaither and Emily Alley; 32 grandchildren, 35 great-grandchildren and one great-great grandchild. In lieu of flowers, the family requests that donations be made to St. Vincent de Paul Society c/o St. Jude Catholic Church, 500 East Dallas St., Mansfield, Texas 76063. The Jackson Family is requesting all guest and participants wear masks.

George Edward &#8220;Eddie&#8221; Jackson, 76, passed away Wednesday, November 17, 2021 with his devoted wife of 45 years, Ramona at his side. Visitation will be held at Blessing Funeral Home in Mansfield Friday, November 19, from 6pm-8pm, with... View Obituary & Service Information

The family of George Edward Jackson created this Life Tributes page to make it easy to share your memories.

Send flowers to the Jackson family.