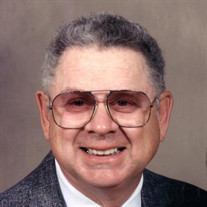 George Raymond Knudson, age 95, a native of Fargo, North Dakota and longtime resident of Mansfield, Texas, died peacefully Thursday morning, March 11, in the presence of his sons at his home. George was born in 1925 in Fargo, North Dakota to Millard and Mary Terese Knudson. He grew up on Fargo’s south side and attended Sacred Heart Academy. While attending Sacred Heart, George played drums professionally throughout the region with, among others, the George Schon Band. And although Big Band was the sound of the times, George’s favorite music was Dixieland. Upon high school graduation in 1943, George enlisted in the U.S. Navy and served in the Pacific theater as a radar operator on the destroyer USS Laws until the end of WWII. After the war, George returned to Fargo and began his 29-year career as a salesman for Lavelle Lumber Company, keeping his drumming to local gigs part-time. In August, 1946, George married Imogene Schons. He and Jean were active in their community and parish. Their four children attended St. Mary’s Elementary and Shanley High School. As a member of the Knights of Columbus, George was renowned for his good humor and friendship. With his eldest son, Jim, he built his vacation home on Fox Lake near Detroit Lakes, MN. George and Jean moved to Mansfield, Texas, in 1979, where George sold hardwood panel products for States Industries until his retirement in 1987. George brought his North Dakota friendship and good humor with him to Texas. He and Jean were members of the Walnut Creek Country Club where golf became a big part of their social life and retirement activities. As a woodworking hobbyist, George spent many hours in his home shop and sold his creations at the Mansfield Antique Mall. He built many of the bluebird houses still on the WCCC golf courses to this day. In retirement, George was also instrumental in founding the Retired Men’s Golf Association at the Mansfield club. He remained a devout and generous member of Mansfield’s St. Jude’s Catholic Church and served as an usher there for decades. As a transplanted Texan, he never wavered in his support for the Rangers. George is preceded in death by his wife, Jean, in 2004; his brothers Robert, John, Harold, and Donald Knudson; and by his sisters Mary Gordon and Patty Schons. Surviving family members include his children: Jim (Cathi) Knudson, Fargo, ND; Chuck (Barb) Knudson, Mansfield TX; Peggy (Harlan Jackson) Knudson, Las Cruces, NM; and Bob (Karen) Knudson, Dallas, TX; six grandchildren; and four great-grandchildren. In lieu of flowers, please donate to the Gary Sinise Foundation in honor of George. A funeral Mass will be held at St. Jude’s Catholic Church on March 16th @ 10:00 AM. Burial following the service at Calvary Cemetery.

George Raymond Knudson, age 95, a native of Fargo, North Dakota and longtime resident of Mansfield, Texas, died peacefully Thursday morning, March 11, in the presence of his sons at his home. George was born in 1925 in Fargo, North Dakota to... View Obituary & Service Information

The family of George Raymond Knudson created this Life Tributes page to make it easy to share your memories.

Send flowers to the Knudson family.