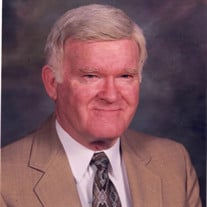 Glen Harold Smith went home to the Lord on March 2nd, 2021. He was 85. Glen was born to Archie and Florence (Brown) Smith on April 24, 1935 in Poteau, Oklahoma. Glen attended Will Rodgers High School in Tulsa and later The University of Tulsa where he studied for the professional Engineering Exam. Glen spent his career in the oil and gas industry as a Draftsmen, Engineer and Branch Manager. Through High School friends, Glen met his dear Susie on November 19, 1950. They were married shortly after high school and spent the last 67 years together. They used much of their spare time creating elaborate gardens at their various homes and developing wood projects in their garage. Glen spent 13 years with National Tank Company, later CE-NATO, in Tulsa, then moved to Ponca City, Oklahoma to work for Heater Technology Incorporated for 10 years. He returned to CE in 1986 and finished his career in Houston, Texas. Like most oil industry veterans, Glen had assignments in the major oil patches including: Tulsa, Ponca City, Lake Charles, New Orleans, Long View, Midland and Houston. Glen served his country from 1959 to 1963 in the United States Army. He spent a great deal of time in Germany disposing on munitions from WWII and earned his life-long nickname, Sergeant Do What. The constant exposure to ordinance explosions had left him with a hearing deficit that prompted many conversations to begin with, “Do what?” In Glen’s spare time, he enjoyed collecting comic books, woodworking, carving, gardening, tending to his Koi pond and volunteering at Tarrant County College. Glen loved volunteering at First United Methodist Church in Mansfield, his church home for the last 20 years. He and Susie worshipped there every Sunday. Glen volunteered at the Wesley Mission Center, Feed the Kids, Stephen Ministries and served as an usher. Glen, never missed an opportunity to get involved. He also volunteered at the Mansfield Citizens Fire Academy and the Mansfield Citizens Patrol. Glen is preceded in death by his parents and son, Jeffrey Scott Smith. Glen is survived by his loving wife, Susie, son Gregg (wife Shannon), granddaughters Lauren Warner and Katelyn Burleson and siblings Donny Smith and Peggy Strong. In lieu of flowers, please make memorial donations to the Alzheimer’s Association, www.alz.org

Glen Harold Smith went home to the Lord on March 2nd, 2021. He was 85. Glen was born to Archie and Florence (Brown) Smith on April 24, 1935 in Poteau, Oklahoma. Glen attended Will Rodgers High School in Tulsa and later The University of Tulsa... View Obituary & Service Information

The family of Glen Harold Smith created this Life Tributes page to make it easy to share your memories.