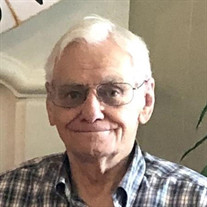 Glenn Robert Mayer, 90, of Arlington, passed away on July 28, in Mansfield, Texas with his family by his side. Glenn was born on a farm in Waukomis, Oklahoma to Andrew and Lydia Mayer during the Great Depression. He grew up in Hydro and Hobart, Oklahoma with his brother Neal and his dog Pal. Growing up, he worked at the family bakery and played school sports. After high school, he attended baking school at Oklahoma A&M technical college in Okmulgee, Oklahoma. Glenn served in the U.S. Army during the Korean War and was a radio operator for the first Minute Man missile. After his military service, Glenn attended the University of Oklahoma, where he received a degree in business administration. Glenn was a proud Sooner his whole life. While attending baking school in Okmulgee, Glenn met the love of his life, Marty Boatman. She tells the story of how she saw him walking down the road, thought he was cute, and offered him a ride. They fell in love and were married on September 4, 1954, celebrating 66 years of marriage this past year. During his career, Glenn managed the food service for banks, retail stores, and restaurants. He served as president of the Ft. Worth Restaurant Association and was involved with various civic and church groups in the Ft. Worth area. In 1974, Glenn and Marty started Mindy Lu’s Pies. Over the past 47 years, through both adversity and success, their mission was to provide a quality product and to share their Christian faith with others. Glenn and Marty worked as a team and were partners in building the business. They always gave God the credit for the success of Mindy Lu's Pies. Glenn loved to tell people about the pies and would always share a business card and an encouraging word with everyone he met. Over the years, he has touched many people’s lives through his welcoming manner, his Christian testimony, and his generosity. Being a faithful and loving husband, father, grandfather, and great grandfather was very important to Glenn and he wholeheartedly loved his family. Glenn dedicated his life to Jesus and was faithful and generous with his time and resources to share the Gospel with others. In addition to his wife Marty, and his children, Mark and Mindy, he is survived by his son-in-law, David Ellis, his daughter-in-law, Georgann Mayer, his niece, Linda McCammon, nine grandchildren, and three great grandchildren. He was preceded in passing by his parents, Andrew and Lydia Mayer, and his brother Neal Mayer. A Celebration of Life will be held at Freedom Life Church, 1496 Heritage Parkway, Mansfield, Texas on Friday, August 6 at 2 P.M. His family will be present to welcome friends and loved ones, and there will be opportunities to share stories and remembrances of Glenn’s life. In lieu of flowers, please send memorial donations to The SUUBI Project (http://www.thesuubiproject.com) or the church or charity of your choice.

Glenn Robert Mayer, 90, of Arlington, passed away on July 28, in Mansfield, Texas with his family by his side. Glenn was born on a farm in Waukomis, Oklahoma to Andrew and Lydia Mayer during the Great Depression. He grew up in Hydro and Hobart,... View Obituary & Service Information

The family of Glenn R. Mayer created this Life Tributes page to make it easy to share your memories.

Send flowers to the Mayer family.