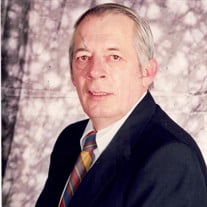 Grady Davis, Jr. passed away March 13, 2021 in Mansfield. He was 82. Grady was born to Grady and Jesse (Hyer) Davis on April 29, 1938 in McRae, Georgia. Grady started his work ethic at a very young age. As a child, he helped support his family by picking pecans and picking cotton. At the age of 11, he worked at a watermelon farm. In his teenage years, however, Grady ran moonshine from Georgia to Florida. A commonly repeated story Grady shared with his family was that his first car was a 1920’s era Chrysler that he bought for $40.00. Also, a much loved Ford Fairlane Grady once owned, was totaled by his brother. Grady served as a non-combatant during the Vietnam War as an airplane mechanic. He served his country as well, in the same manner, during the Iranian Crisis. He continued his professional career as an aircraft mechanic for General Dynamics and Lockheed until his retirement. There is an overpowering sense of fatigue and uncertainty in aging and illness. However, Grady exemplified strength in adversity. His life was successful due to a strong work ethic, recognizing the correct times of loving one’s family and showing that love, and, taking time to leave a lasting legacy with grandchildren. While Grady may have shown a gruff exterior, his family recognized the “softie” that he actually was. Grady’s family, from his loving wife, Aurora, of 36 years, to his daughters and son and grandchildren, are reminded how special they were made to feel at the selflessness of Grady. He exuded patience, an ability to laugh and enjoy the small things life had to offer. His rich southern accent had a sense of warmth to his family. His hugs will always be remembered as well as his genuine concern for the well-being of those he loved, as well as others. Memories of fishing trips, an infamous trip to Florida and an emergency mouse eviction, carved a lasting impression of Grady in his family’s minds and hearts. Grady is preceded in death by his parents as well as siblings Lawrence, Raymond, James and Betty. Grady is survived by his wife Aurora, brothers Lonnie and Calvin, children Jerri Morrissey, Joan Mooneyham, Rick Patricio, Mary Ann Laserna, Aurie Patricio and Jennifer Nguyen; grandchildren Jennifer and Ace Morrissey, Aubrey, Eric, Oren and Mia Paticio, Raeanne Laserna, Genesis Van Conant, Krista Guerra, Joseph Mesias and Cassandra Nguyen, Nicholas Nguyen, Victoria and Xavier Nguyen as well as great grandchildren Alexandria Wade and Everly Van Conant. “I will always remember my dad as a sharp dressed man and had the most beautiful hands of any man I have known.” JERRI “I didn’t like you at first, but you persevered and won my heart.” MARYANN “A true warrior, who fought the toughest battle anyone can endure.” AURIE “Grandpa was sentimental and wasn’t afraid to cry when he was reading a card or listening to a meaningful song.” RAEANNE “Grady had many roles in his life, brother, husband, father but his best role was being a grandfather to my cousins and I.” GENESIS “As soft as he was with the family, he also was the toughest and hardest fighter.” JOSEPH “Grandpa is going to win the slow game because all he does is sit and talk on the phone.” THE TWINS

Grady Davis, Jr. passed away March 13, 2021 in Mansfield. He was 82. Grady was born to Grady and Jesse (Hyer) Davis on April 29, 1938 in McRae, Georgia. Grady started his work ethic at a very young age. As a child, he helped support his family... View Obituary & Service Information

Send flowers to the Davis, family.