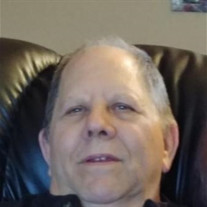 Harry James Brodie, 74, passed away December 13, 2018 in Mansfield. Harry was born to John Frances and Elizabeth Katherine (Lieber) Brodie and January 21, 1944 in Little Rock, Arkansas. Harry was a member of the Arlington High School class of 1963. During his High School years, Harry was a part of the “Offbeats”, a band made up of his brother John and friends, Larry French, Jerry Cates and Calvin Walker. In 1962, introduced by a friend, Harry met Dorinda Hutton and for 55 years, they loved, shared, created a family and had 3 children. Harry is a man of God and of fish. A Christian, that attended New Lives For Old Grace Fellowship in Euless, he also, as a young man, was an avid fisherman, winning a Bass boat in a tournament in 1978. His love of family, and their love of him, created a joy in Harry’s family life. That all stemmed from the love of his bride, Dorinda. Harry is a retired employee of General Motors. His contribution to General Motors spans 32 years. Harry is preceded in death by his parents, John and Elizabeth Brodie. Harry is survived by his wife, Dorinda, children Jana and James Brodie and Jen (Terry) Bradford, brother Mike, grandchildren Zac, Clay and Mitchell Brodie, Josh Allison, Kara Woodley and 8 great-grandchildren. For those that knew and loved Harry, they know of Our Lord’s love. The evidence of that is found of their love for one another and the fond memories of a great man’s life lived with enough love for all of Harry’s family.

The family of Harry James Brodie created this Life Tributes page to make it easy to share your memories.

Send flowers to the Brodie family.