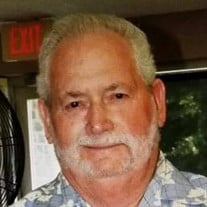 Henry E. Frith, 74, of Mansfield, Texas passed away October 26, 2018, in his home. Henry was born on December 24, 1944 in Borger, Texas, the son of Henry H. Frith and Alice Mae Davis Frith. He was raised in Borger and at the age of 12, was baptized by Bro. Debs Bailey at Borger Church of Christ. After attending Borger High School, he trained with his family to learn the plumbing business. He remained in the plumbing business for 13 years. In 1973 Henry went to work at the GM Plant in Arlington, Texas retiring in 2006 after 33 years of working maintenance on automobile assembly lines. He moved to Mansfield in 1976. Henry married Gene Poston in 1964 and in 1965 their son, Scott Allen Frith was born. Henry was predeceased by his son, Scott in 2014 and his wife Gene. His grandson, “Scotty” Scott Allen Frith, Jr. was born on November 28, 1994. Henry met Darlene Best at Karaoke Night. He and his wife to be started dating in 1995. She preceded him in death on November 22, 2014. Henry was a true outdoorsman, a Hunter, Fisherman, and loved working outdoors. He hunted his entire life and would shoot 4-5 deer each year for about 45 years. He also had enjoyed fishing Lake Fork since 1988 and bought lake front property in 1995. Henry Ran trot lines for over 25 years at Lake Fork catching large catfish between 40-65 lbs. His personal best was an 82 lbs. flathead catfish. He enjoyed entertaining at the Lake and was always inviting friends for the weekend. Henry had fish fry’s for friends and family with up to 75 people attending, live bands and all you can eat fried catfish. He loved spending time with his grandson Scotty at the lake. Henry loved to stay busy and was always building things. He made custom knives for about 25 years. He’d make them out of specialty woods, bone, and horns. He also created Custom ironwork and welding including BBQ pits, fish fry equipment, and various camping accessories. Henry is survived by his Grandson, Scott “Scotty” Allen Frith Jr.; Girlfriend, Christine Craig; Sister, Sarah Frith Fisher and husband Eugene Fisher; Nephews, Brent Fisher and wife Becky (sons Zach Fisher, Zane Fisher), Brad Fisher and wife Catrina (daughters Audrey Fisher, Lilly Fisher); Niece, Sondra Fisher (children Erin Voto, Colin Voto, Harrison Voto); and numerous cousins and friends.

The family of Henry E. Frith created this Life Tributes page to make it easy to share your memories.

Send flowers to the Frith family.