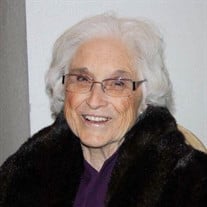 Hilda Margaret McKinley Smith, 88, passed away in her home on August 26, 2019 in Burleson, TX. Born in Albany Kentucky, Hilda moved from Louisville KY with her husband, Paul Smith to Arlington TX in 1992 to be near their two sons and grandchildren.... View Obituary & Service Information

The family of Hilda Margaret Smith created this Life Tributes page to make it easy to share your memories.

Hilda Margaret McKinley Smith, 88, passed away in her home on...