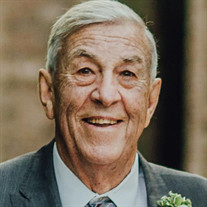 Homer Jurl Kirk was born on November 3, 1935 in Blackwell, TX to Jurl and Vallie Donnell Kirk. He passed away on Wednesday, July 3, 2019 at Methodist Mansfield Medical Center Hospital with his family by his side. As Homer grew up, his family moved to Marietta, Oklahoma where he attended Thackerville High School. After graduating he attended electronics school in Dallas, TX. During this time, he was introduced to Annie Belz and after dating for 4 years, Homer received the call to serve his country, so he proposed to the love of his life, they married in 3 weeks on June 21, 1958 and they recently celebrated 61 years of marriage. After marrying they went to Colorado Springs, Colorado, where Homer was stationed for 5 months and then transferred to Ft. Huchuca, Arizona for a year and a half. On January 1, 1960 they welcomed their first child, Kathy. Homer was discharged from the Army on July 5, 1960, but then he was called back to serve his country again during the Berlin Crisis and finally discharged again in 1964. Homer and Annie welcomed their second child, Greg, on December 20, 1963. Homer worked for 28 years as a printer for Braniff Airlines where he enjoyed many years of wonderful family vacations. After Braniff closed its doors, Homer went to work for Lomes and Nettleton and then American Airlines where he retired. Homer had many hobbies which included: traveling, camping, fishing, water sports, hunting with his camera, gardening, and working with his hands. After retirement he remained very active in his church, served as a deacon, and is presently the longest attending member of the Grand Prairie Seventh-Day Adventist Church. Homer will be remembered for his strong work ethic, family values, wonderful story telling and kind heart. He was a loving husband, father, grandfather, great grandfather, devoted son and brother, and a faithful friend. He will be forever missed. Homer was preceded in death by his parents and a brother Winston Glen, and his son Greg Jurl Kirk. Those left to treasure his memory are his wife Annie, daughter Kathy Mutchler and husband Scott; grandson, Shawn Mutchler and wife Bethany; granddaughter, Courtney Mutchler; great grandchild, Thomas Gregory Mutchler; one brother Jesse Kirk and wife Joyce; one sister LaDaria Riggs and husband Bill; many nieces and nephews; and a host of family and friends. Pallbearers: Chris Kirk, Kirk Riggs, David Belz Jr., Rick Belz, Gary Argo, Philip Belz, Mike Belz, Ronnie Belz. Honorary Pallbearers: Jeremy Riggs, Jeff Belz, Kenneth Argo, Steve Bishop, Darrell Belz. In lieu of flowers, the family requests donations made to the Homer Kirk Memorial Fund at the Seventh Day Adventist Church, Grand Prairie, Texas.

Homer Jurl Kirk was born on November 3, 1935 in Blackwell, TX to Jurl and Vallie Donnell Kirk. He passed away on Wednesday, July 3, 2019 at Methodist Mansfield Medical Center Hospital with his family by his side. As Homer grew up, his family... View Obituary & Service Information

The family of Homer Jurl Kirk created this Life Tributes page to make it easy to share your memories.

Send flowers to the Kirk family.