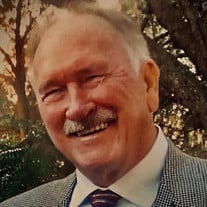 On the morning of April 22, 2020, Ira Edward (Ed) Cheek, of Mansfield, TX, went to be with his Lord at the age of 86 after an extended battle with brain cancer. Ed was born to James David and Sarah Taylor Cheek in Waxahachie, TX in 1933. He received his Bachelor of Science degree from Abilene Christian College in 1957. In March 1953 he married Lavena Ballow and together had two sons, Randy and Joseph (Joey). Later in life he married Mary Jane Bitz and they remained married until Jane’s death in June 2007. He spent the last years of his life with his beloved Ann Tipping. Ed was raised in the Oak Cliff area of Dallas and attended LaReunion Elementary, Greiner Jr. High, and Crozier Tech High School. He attended Arlington State College, Henderson County Jr. College, and Abilene Christian College. Ed played football at all three colleges and set an NJCAA record for touchdown passes in a Junior College career. He worked in the resort business in Arizona and Wyoming for many years but ultimately returned to reside in his native Texas. Ed was an avid golfer with a special knack for “gamesmanship” on the golf course. Even in the later stages of his life he was easily shooting his age, a remarkable feat. At age 78 he recorded a 62 on 18 holes at the Lost Creek course, certainly one of the biggest highlights of his golfing days. He was also a devoted country and western music enthusiast, especially regarding the early country and western singers. He taught himself to play and loved to strum his guitar, sing, and entertain. Ed is preceded in death by his parents, James and Sarah, wives Lavena and Jane, sister Virginia, and brother James Randall. He is survived by his beloved life companion, Ann, sister Rebecca, sons, Randy and wife Jeanne, Joey and wife Chrisann, granddaughters, Tara and husband Warren Green, and Kelly Cheek, great grandson Jackson Green, and great granddaughter Asa Green, along with several cousins, nieces, and nephews. A public memorial service will be held at 11:00 AM on June 13th, 2020, at Turning Point Church, 10700 Burleson Road, Ft. Worth, TX 76140. Ed’s remains will be buried alongside Mary Jane Cheek in Napoleon, ND at a later date. In lieu of flowers please provide a memorial in the name of Ed Cheek to the Cathy Wickwire Scholarship Fund at TurningPoint Church.

On the morning of April 22, 2020, Ira Edward (Ed) Cheek, of Mansfield, TX, went to be with his Lord at the age of 86 after an extended battle with brain cancer. Ed was born to James David and Sarah Taylor Cheek in Waxahachie, TX in 1933. He... View Obituary & Service Information

The family of Ira Edward (Ed) Cheek created this Life Tributes page to make it easy to share your memories.

Send flowers to the Cheek family.