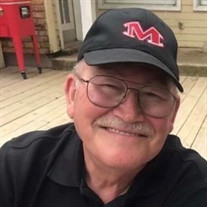 Jack Culver “Jackie” Cronkrite, 77, went to be with the Lord on February 11, 2021 after a long battle with Alzheimer’s. He was born in Lillian, Texas on May 19, 1943. He was the second child and only son of John and Jacqueline Cronkrite. Jack grew up on a farm in Lillian. As a young boy, he would help his parent with the chores on the farm. After school, he would get on the tractor and finish the plowing and planting what his father started earlier that morning before work. He graduated from Alvarado High School in 1961. Jack was an exceptional student who excelled in athletics and academics. He was a proud Alvarado Indian who was a member of the football, baseball, and basketball teams. It was when he was an upper classman in high school that a blond, blue eyed freshman named Carol Renfro caught his eye. Since Lillian was such a small town, Jack had known the Renfro family pretty much his whole life but that pesky, little, talkative girl grew up and he fell deeply in love with her. Jack and Carol were married on November 16, 1963. They started their lives together in Fort Worth and eventually settled for good in Arlington in the early 1970s. Right after they married, Jack got a job as a federal employee for the US Army of Corps of Engineers. The majority of his career at the Corps he worked at the Soil and Testing Laboratory in Dallas. During his time with the Corps, he was recognized with many awards and honors. At the Laboratory, he started at an entry level position and eventually worked his way up to be the Manager of the Laboratory. For just over 38 years, Jack was a proud and dedicated employee of the US Army Corp of Engineers. It was in March 1967, that Jack and Carol welcomed their first child and son, John David. Three years later in Jan 1970, they had their daughter, Jaime Lynn. Jack was a very doting father. He supported them in everything they did and put them first in his life. He attended every football, soccer, volleyball, band, and drill team activity they participated in. He was the go-to man for any math or history homework questions. He was like a walking history book. Jack was very strong in his faith and exemplified a life of unselfishness. In 2001, his granddaughters needed a caregiver during the day and he immediately went into his boss’s office and put in for retirement after 38 years. On September 1, 2001, Jack (aka PaPaw) started his second career, taking care of his 5 granddaughters, Jordyn, Ashley, Morgan, Jadyn and Jaley. For over 15 years, PaPaw devoted his life to his granddaughters. He was the first one in the school pick-up line every day. He attended softball practice, dance lessons, soccer practices, school programs, concerts, and school field days. Jack had a special bond with his granddaughters, and they made memories that will last forever. Jack is survived by his loving wife of 57 years, Carol; Daughter Jaime Lynn and son-in-law Jadey James of Kennedale; Daughter-in-law Sandy Cronkrite of Arlington; Granddaughters, Jordyn, Jadyn, and Jaley James of Kennedale; Granddaughters Ashley and Morgan Cronkrite of Arlington; Sister DeDe Mitchell and partner Bret Carter of Benbrook; Sister Carla Brannan and partner John McCluskey of South Hadley, Massachusetts; Sister-in-law Lynn Nall of Grandview; Brother-in-law Randall Hess of Alvarado; Brother-in-law Tim and Vanessa Renfro of Lillian; Brother-in-law Terry and Mary Renfro of Austin and many nieces and nephews. He was proceeded in death by his son, John David Cronkrite; Parents John and Jacqueline Cronkrite; In-laws Harold and Doris Renfro; Sister Georianne Hess. Jack exemplified what true goodness really means. He will be missed dearly by everyone that knew him. As PaPaw always told his granddaughters, “I love you a bushel and a peck!” Papaw, we love you too!