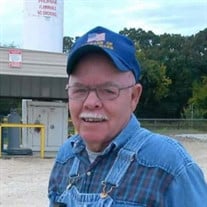 Jackie Ray Fowler 87 of Burleson Texas, went home to be with our Lord and Savior Jesus Christ on November 4, 2020 at 4:26 AM at Grandview Nursing Home in Grandview, Texas. Jackie was born to Alvin and Clara Fowler on November 7, 1932 in Roosevelt, Oklahoma. Jack was a faithful child of God and loved serving as an usher, deacon, elder and in any capacity needed to help others. His early years included picking cotton after school and helping care for his 6 younger brothers and sisters. At 18 he became a lineman in the Air Force after enlisting in 1950 and served during the Korean War. No matter what difficulties or struggles came Jack's way, he never let it stop him, “You have to keep moving” he would say and off he would go to work in the yard or barn. Jack loved his family and especially enjoyed spending quality grandpa time with his grandchildren and great grandchildren. After his retirement he delivered Meals on Wheels in Johnson County and regularly visited nursing home residents to brighten up their day. Jack loved reading his Bible and then going to his favorite spot, the front porch to enjoy his morning coffee. He also loved reading old western novels and spent many an afternoon reading in his rocking chair. Though he experienced tremendous loss in his life, Jack always gave people a since of hope and generously shared that hope with others. Jack always loved large and surely will be missed but his legacy of what it means to be a “good man” will live on forever. Jack is preceded in death by his Mother and Father, Alvin and Clara Thompson Fowler, Wives: Barbara Ann, Freida Merle, and Freida Lou Romans Fowler. Siblings: Gary, Gay, Franklin, Steve and Joe Michael Fowler. Children: Lester Wayne, Robert Kipton Fowler. Jack is survived by Sister: Kay Fowler Nelson, Sons: Dale Ray, and Tracy (Grady) Dane Fowler. Brother-in-law Morris Nelson. Daughter-in-law: Lisa Ann Fowler. Step Children: Sheila Rogers and Husband Danny Rogers, Pamela Sue Wallingsford, Grandchildren: James Dillon Fowler, John Michael Fowler, Jeremiah Wayne Fowler, Joel Stephen Fowler, Danny Fowler, Leanna Paige Broom, Robin Nicole Fowler, Amber Coleman, Jeremy Rogers and Christopher Barber. There is a 60 person occupancy limit in Blessing Colonial Chapel. Also, all persons are required to wear masks inside the chapel. Service video for Mr. Jackie Ray Fowler: https://video.ibm.com/channel/23866912/video/lms24f

Jackie Ray Fowler 87 of Burleson Texas, went home to be with our Lord and Savior Jesus Christ on November 4, 2020 at 4:26 AM at Grandview Nursing Home in Grandview, Texas. Jackie was born to Alvin and Clara Fowler on November 7, 1932 in Roosevelt,... View Obituary & Service Information

Jackie Ray Fowler 87 of Burleson Texas, went home to be with...

Send flowers to the Fowler family.