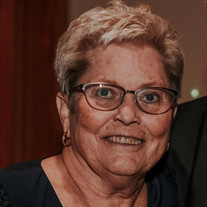 Jackie Odell (Streetman) Leasor was born in Greenwood, South Carolina on September 27, 1941. She left this world on November 10, 2021, in the presence of her family, which is just what she wanted. She is preceded in death by her mother, Rosalee Hopwood Streetman, who passed when Jackie was 3 during childbirth with Jackie’s younger brother, her father, Odell Streetman, and her three brothers, Garland, Ray, and Rudy. She is survived by her husband of 62 years, David Ralph Leasor, her son, Mike (Mimi), daughter, Kim Harrsch (Rob), her grandchildren, Justin Harrsch (Kim), Christopher Leasor (Jamie), Kathryn Frederick (Tyson), and Ali Heimbigner (Kyle). Her great grandchildren include Shealynn, Hannah, Cove, Carter, and Ainsley. She is also survived by numerous nieces, nephews, grandnieces, and grandnephews. Jackie was a charter member of the Mansfield Women’s Club and served as its third president.Additionally, she and David were charter members of the Walnut Creek Country Club. She fancied herself the self-appointed food critic of the Club, as she was an excellent cook. Jackie served on various committees at the Club including several officer positions within the Ladies Golf Association. She grew up very poor in the northwest region of South Carolina. She was raised by her aunts and father. It was there she learned how to ring a chicken’s neck and make redeye gravy. She drove the school bus when she was still in high school and was the prom queen. She met David, who is two years older, while visiting her brother who was in the Marine Corp. They eloped and were married in a small South Carolina town one month after she turned 18. David then took her to Indiana to his family, dropped her off to go serve in California, and it was there that the genteel southerner learned the Midwesterner ways. It was not long before they were reunited at David’s next assignment in Hawai’i. Although small in stature, Jackie’s fierce, piercing blue eyes commanded your attention. Jackie lived life like a rock star. When she had the opportunity to travel to new places, she was the first person to hop on a plane or in the car. From seeing the Rolling Stones in Las Vegas with her partner in crime, her sister-in-law Ellen Fuller, to attending Super Bowl XV in New Orleans. She was all about having fun at the hot spots. She even spread a few ashes at St Andrews with her travel buddy, Karen Gustafson. It is only fitting that she waited until about 1:00 a.m. to pass, as that is closing time and she had been known to close down an establishment or two. Jackie loved to entertain and to be entertained and she especially enjoyed spending time with her close friends the Reeds, Esstmans, Gillilands, and Eidsons. Jackie was a woman of unwavering faith and attended First United Methodist Church Mansfield with her family, sitting in the same section and pew each Sunday. She very much enjoyed just being with family on Sunday mornings and then going to eat lunch at her favorite restaurant, Our Place, where she was treated like a queen. The family asks that in lieu of flowers that you make a donation to one of Jackie’s favorite charities in Mansfield: the Mansfield Women’s Club, the Mansfield ISD Education Foundation, the Mansfield Mission Center, First United Methodist Church Mansfield, or Methodist Mansfield Hospital.

Jackie Odell (Streetman) Leasor was born in Greenwood, South Carolina on September 27, 1941. She left this world on November 10, 2021, in the presence of her family, which is just what she wanted. She is preceded in death by her mother, Rosalee... View Obituary & Service Information

The family of Jackie Odell Leasor created this Life Tributes page to make it easy to share your memories.

Send flowers to the Leasor family.