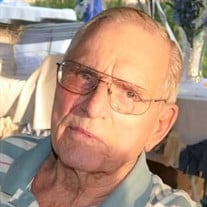 MSgt. James Dee Frost, USAF Retired, passed away January 2, 2021 after a 2 month, non-Covid illness, just five days before his 93rd birthday. A private funeral Mass will be held at 10:00 a.m. on Friday, January 22, 2021 at St. Joseph Catholic Church in Arlington. The Mass will be available to stream at www.stjoe88.org Friends and family are invited to attend the graveside USAF Honor Guard service immediately following at 11:00 a.m. at Calvary Cemetery, 3294 Cannon Drive, Mansfield, TX. Please observe protocols for masks and social distancing. Jim was born on January 7, 1928 in Nevada, Ohio. He was the 5th of 7 boys born to Ralph Ray Frost and Clara Etta Imler. They were a farm family and so he considered himself a farmer. He was a natural athlete. In high school, he wanted to play baseball but chores got in the way of practice. In order to do both, he ran the 4 miles into school and back because he knew he was faster than the bus. Consequently, he excelled at track and field, baseball and basketball. After high school, Jim joined the Air Force. He always said it was the best decision he made for himself. It gave him direction, a career and discipline. While stationed in Topeka, KS he met and married Roberta Dolezilek and they had their 3 children there. In 1960, the family was transferred to Bermuda before returning to Ohio. Jim served as the 1st Sergeant of supply in Korat, Thailand during the Vietnam war. He retired from the Air Force in 1968. He considered himself a military man for the rest of his life. While in the Air Force, Jim began playing golf. He loved golf and his natural athletic ability led to him becoming a very good golfer. So, after retirement from the Air Force, he took a job with the Civil Service as the managing golf professional at Rickenbacker AFB Golf Course. He retired from Civil Service in 1980. In 2003, Jim and Roberta moved to Mansfield, Texas. They bought a house “just off” the course at Walnut Creek Country Club where Jim enjoyed many more years of golf with the RMGA and his daughter and son-in-law. He played his last round of golf at age 91. He enjoyed the last 17 years being near family and watching his grandchildren and great-grandchildren grow. He was preceded in death by his parents, all his brothers, his wife, Roberta and son-in-law, Bill Godwin. He is survived by his daughter, Sharon Godwin of Arlington; sons, Mike Frost and wife, Rita of Fountain Hills, AZ; Patrick Frost and wife, Maritza of Orlando, FL; Grandchildren, Nick Frost; Lindsay Horen and husband, Dave; Justin Godwin and wife, Jamie; Maxwell Frost; Maria Frost; Great-grandchildren, Carter and Lily Horen and Renleigh Godwin. The family asks that in lieu of flowers donations be made to The First Tee of Mansfield, ℅ 1321 Danbury Drive, Mansfield, TX 76063 or the charity of their choice.

The family of James Dee Frost created this Life Tributes page to make it easy to share your memories.

Send flowers to the Frost family.