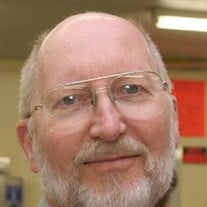 JAMES (Jim) BRYAN HICKS, 77, of Mansfield, TX died on November 15, 2020. He will be remembered as a loving husband, father, grandfather, uncle and friend. Jim was born on January 12, 1943 in Pasadena, TX to Donald W. and Annie Marie Robinson Hicks. He married Elaine Hicks in 1965 in Austin, TX. He was valedictorian of the El Campo TX High School class of 1961 and received his Bachelor of Science Degree in Mechanical Engineering in 1965 from the University of Texas at Austin. He later earned his Master of Science Degree in Engineering Mechanics and his Doctorate of Philosophy in Engineering Mechanics from UT Austin, where he also taught for a period of time. He was employed at the Arnold Engineering Wind Tunnel Testing Facility on the Arnold Air Force Base in Tennessee before joining the LTV Corporation of Grand Prairie, Texas in 1979 as an aerospace engineer. He retired from Lockheed Martin Missiles and Fire Control in Grand Prairie at the end of 2005. Jim was a long-time Mansfield, TX resident, having lived in Mansfield for over 40 years. Jim was known for his honest, direct approach to living, his dry intellectual-infused humor, and his quiet love of family. And sports! He loved the Mavs, Longhorns and Rangers through thick and thin. A life-long learner, over the years Jim would study many diverse subjects and built tools to help his learning, such as astronomy (he built telescopes), audio (built speakers), photography (if there was a family event, he was there to photograph it). Jim was an enthusiastic cyclist, eventually owning eight racing bicycles. If he enjoyed a subject, he would study it with a passion. He loved to read, and this fueled his studies. He was preceded in death by his parents, Donald and Marie Hicks of El Campo, TX and brother Terry, of Austin, TX. He is survived by his wife of 55 years, Elaine Hicks; son Bryan and wife Sandy of Prosper, TX, son Andrew Hicks of Dallas, TX, sister Helen Gray and husband Sam of Abiquiu, NM, brother Melvin (Mel) Hicks and wife Lori of Allen, TX, grandchildren Cooper Hicks, Alex Hicks, Manchester Hicks and MaryLane Hicks and many nieces and nephews. A memorial celebration is planned for a later date. In lieu of flowers, the family requests that a charitable contribution be considered to the Mansfield Women’s Club Scholarship Fund; P.O. Box 1212, Mansfield, TX 76063-2610.

JAMES (Jim) BRYAN HICKS, 77, of Mansfield, TX died on November 15, 2020. He will be remembered as a loving husband, father, grandfather, uncle and friend. Jim was born on January 12, 1943 in Pasadena, TX to Donald W. and Annie Marie Robinson... View Obituary & Service Information

The family of James Bryan Hicks created this Life Tributes page to make it easy to share your memories.

Send flowers to the Hicks family.